We had another ambitious goal for Day 3 of our cross-country road trip – we wanted to reach the town of Dubois, Wyoming, about 45 minutes outside of Grand Teton National Park, and of course had several stops planned along the way. We got an early start and headed for Wildlife Loop Road in Custer State Park, hoping to spot our first bison.

We’d read that first thing in the morning is the best time to see animals, but we only saw a few. First was this pronghorn. 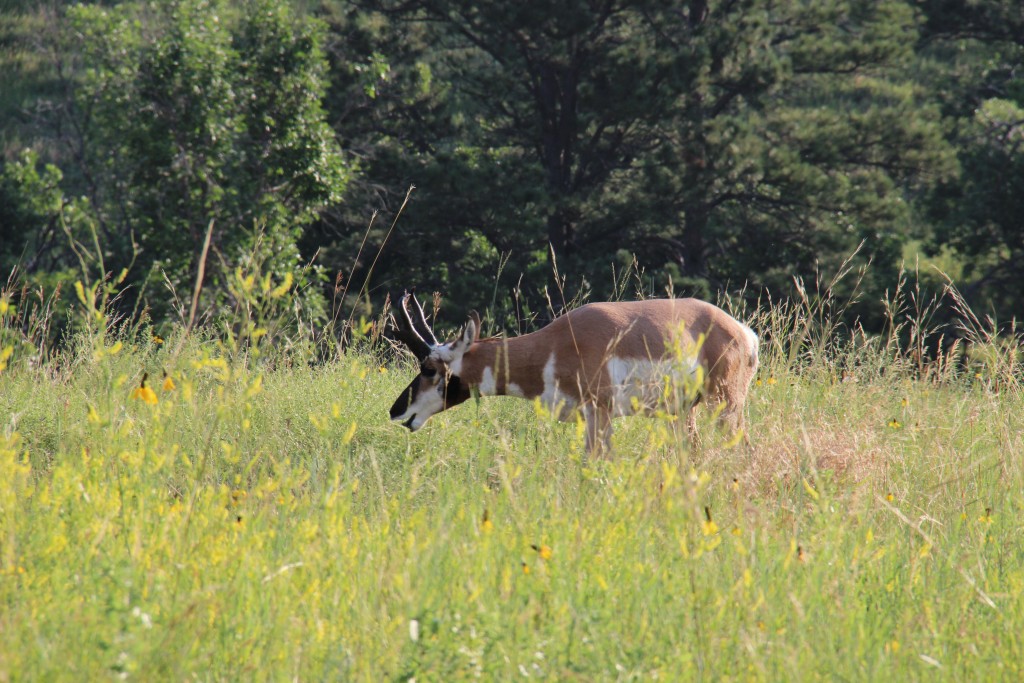 We saw a group of burros as well. 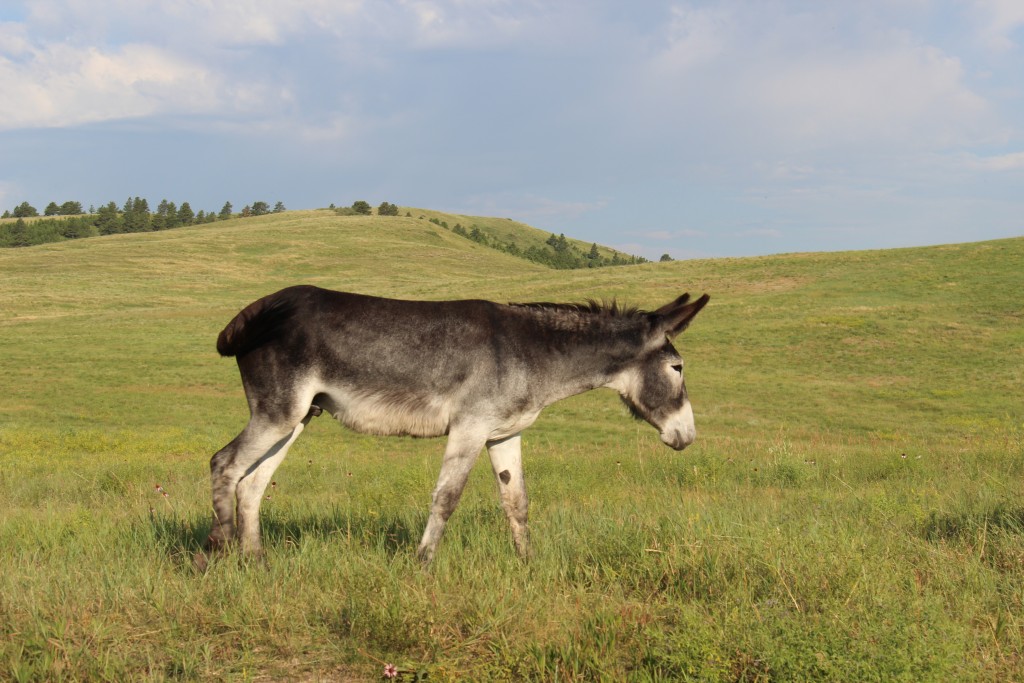 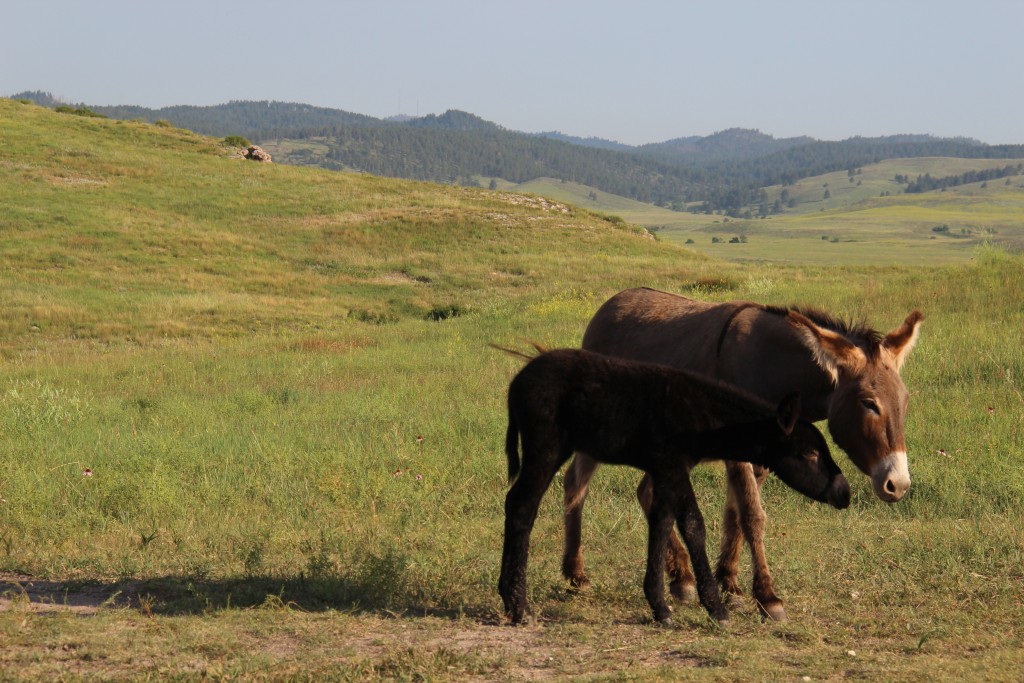 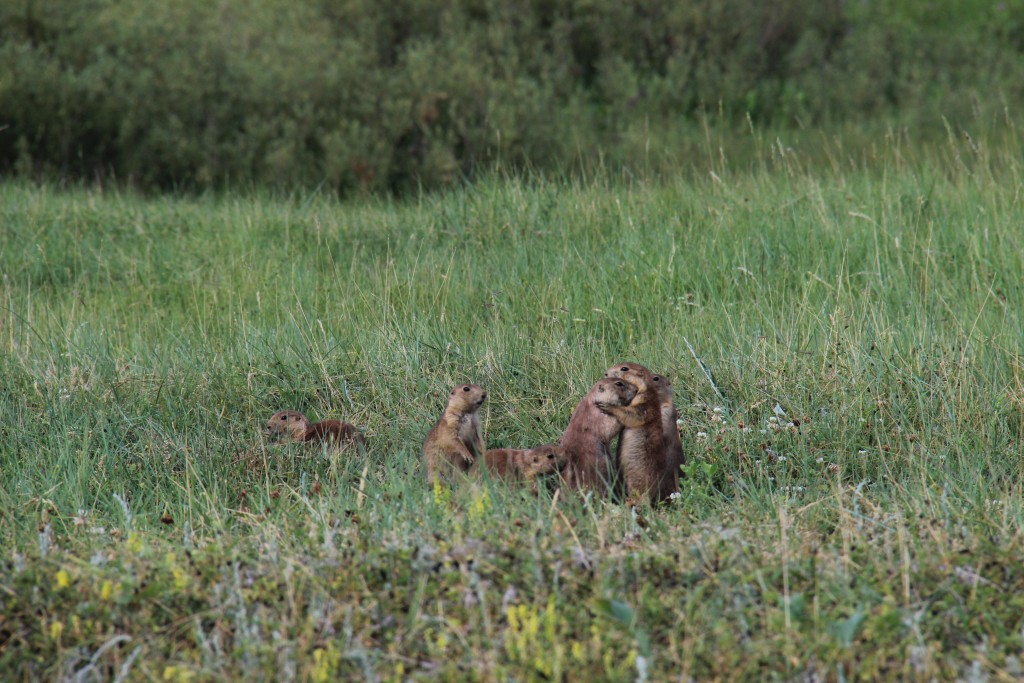 As we reached the end of the Wildlife Loop, we were a little disappointed at not seeing any bison. However, almost as soon as we turned onto the highway down to Wind Cave National Park, we saw this guy walking toward us! 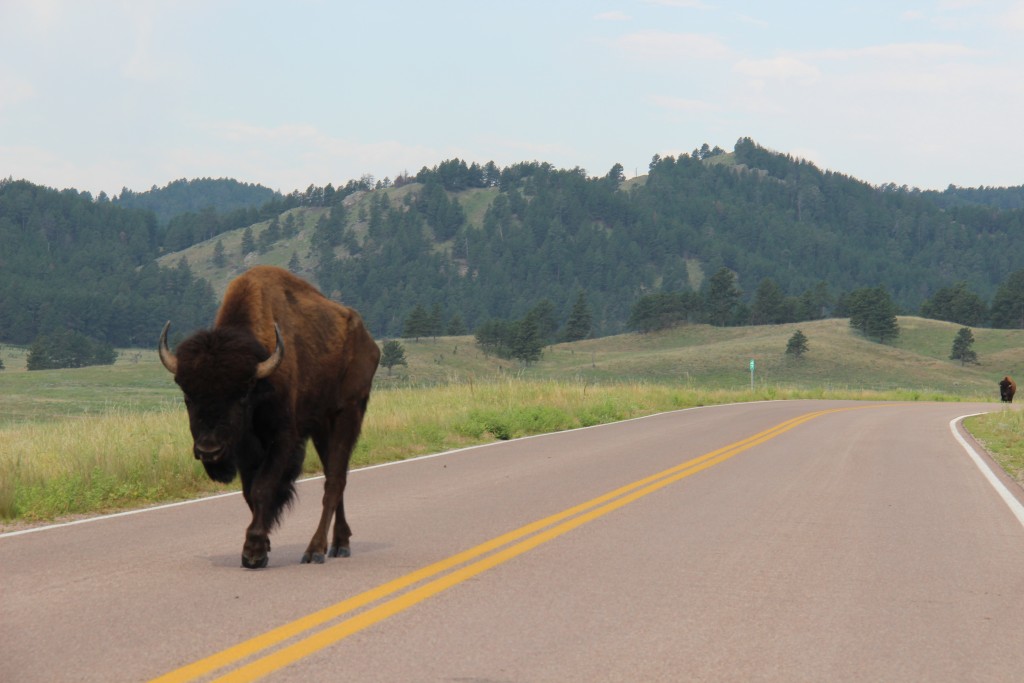 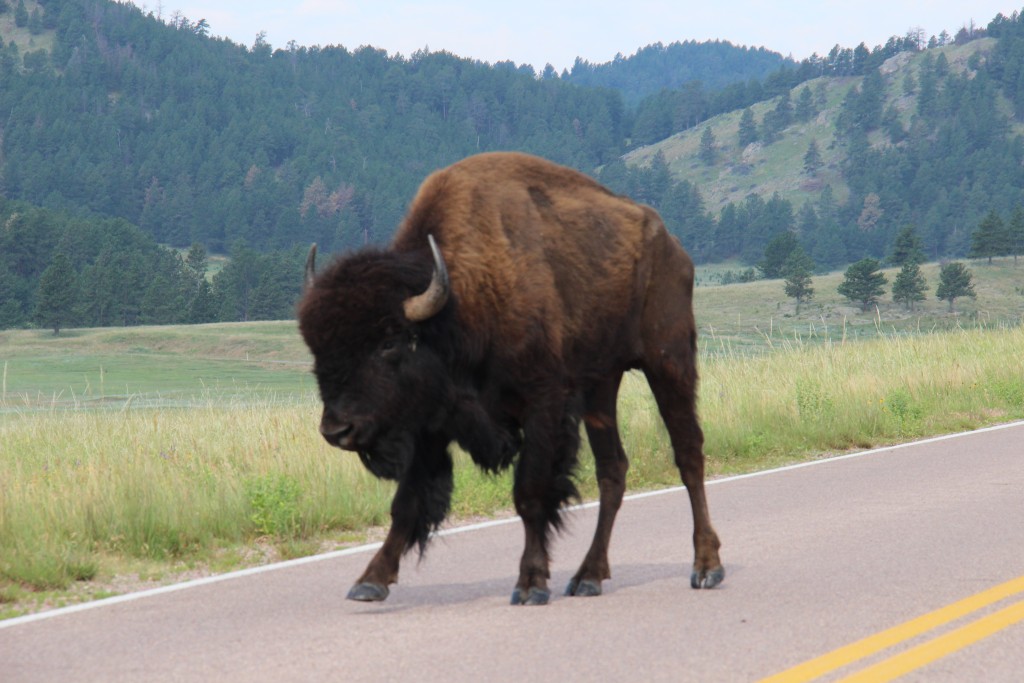 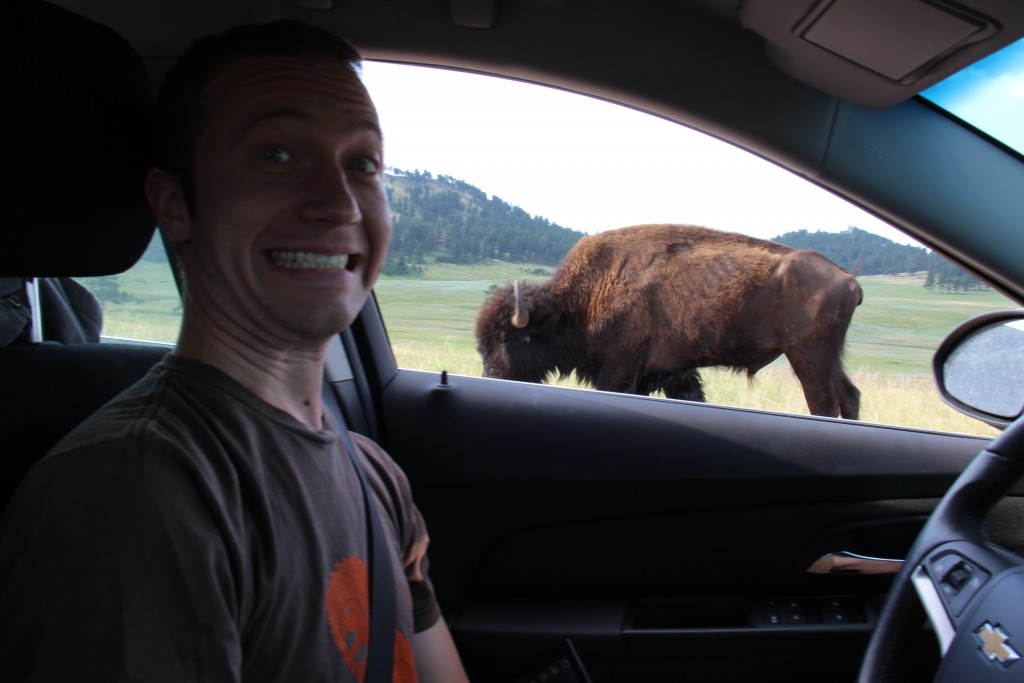 It was about an hour total to drive down to Wind Cave National Park, and we signed up for the cave tour. Wind Cave was the 7th U.S. National Park and is the 6th longest cave in the world – it has 140.47 miles of explored cave passageways, and about 4 new miles are discovered each year. (Do not sign me up for that job!) 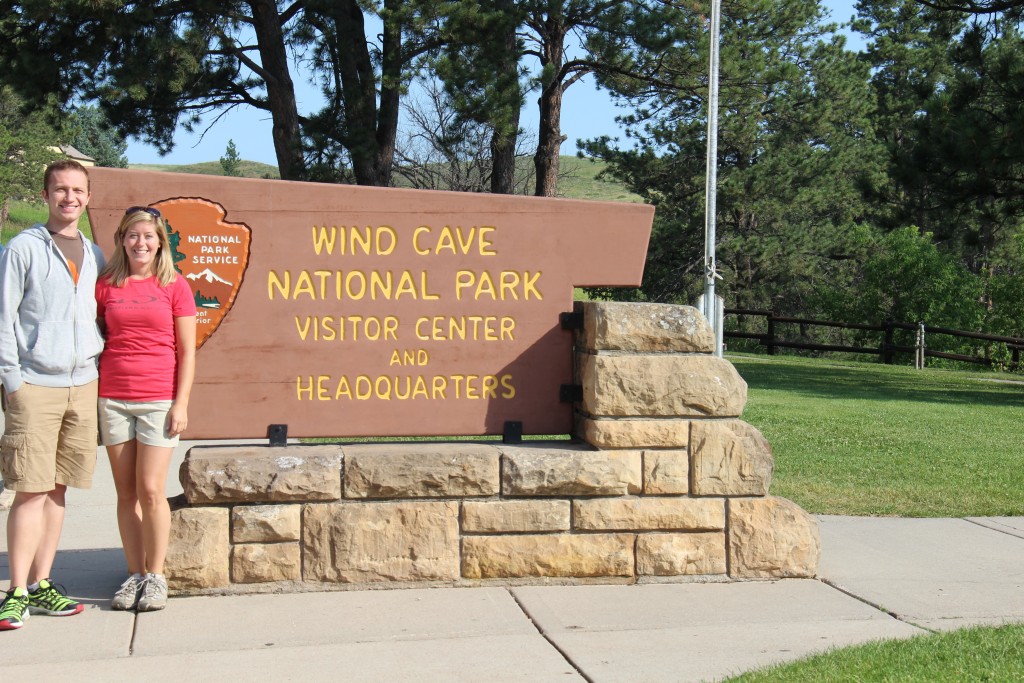 This is the cave’s only natural opening. It was discovered in 1881 when two men heard a whistling noise that led them to this hole. 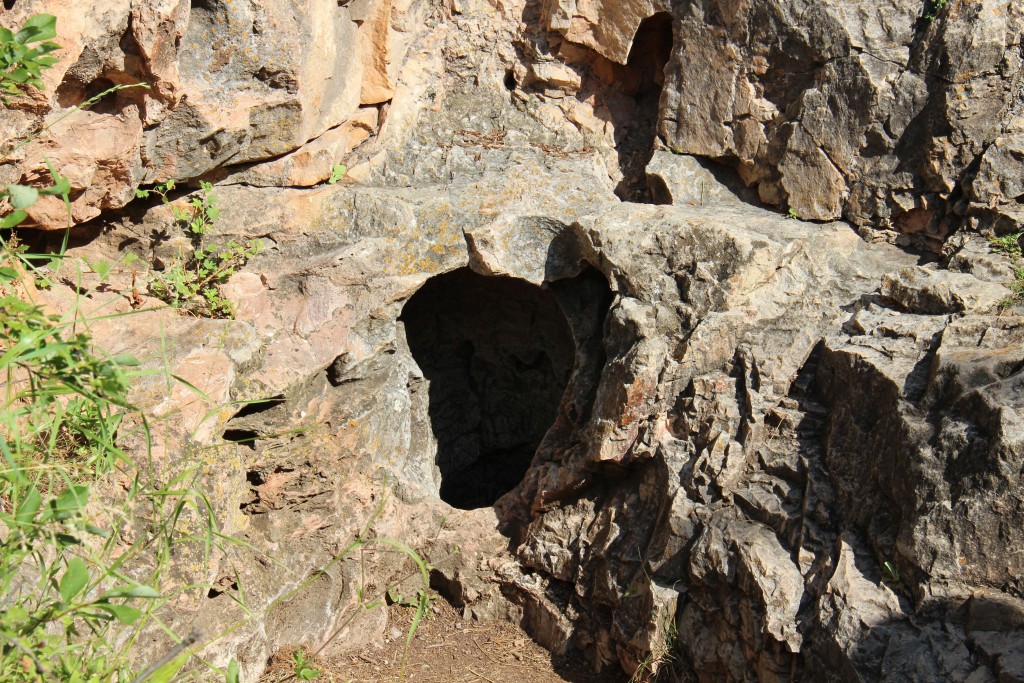 Wind Cave is known for this intricate boxwork, formed from calcite. The calcite filled in cracks in the original rock, and as the rock eroded away, the calcite remained, leaving these beautiful patterns. We loved the tour and would definitely recommend stopping here if you’re in South Dakota! It’s a quick side trip from Mount Rushmore and unlike anything I’d ever seen. 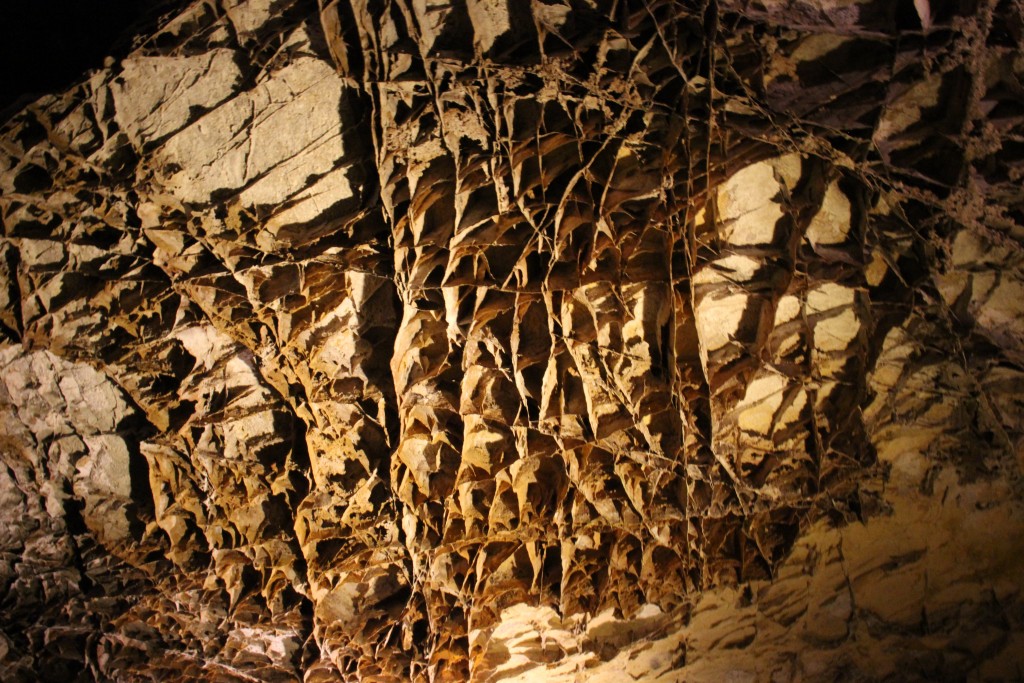 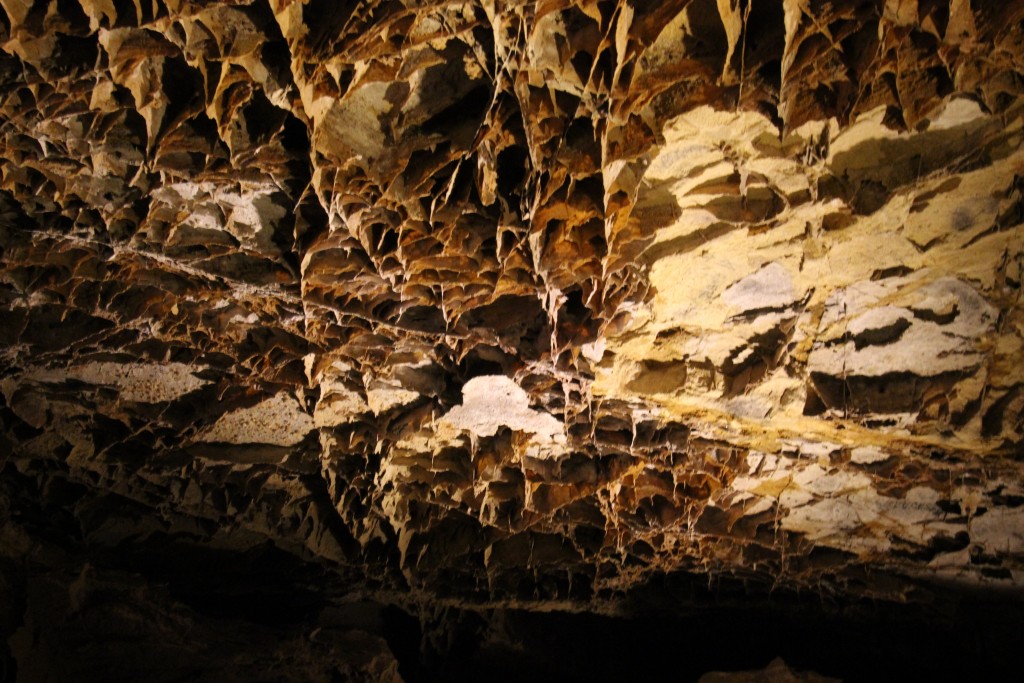 After touring Wind Cave, we got back on the road and headed toward Wyoming. There was a lot of construction around the border between South Dakota and Wyoming, so we weren’t able to get a state sign picture this time. We quickly fell in love with driving through Wyoming! 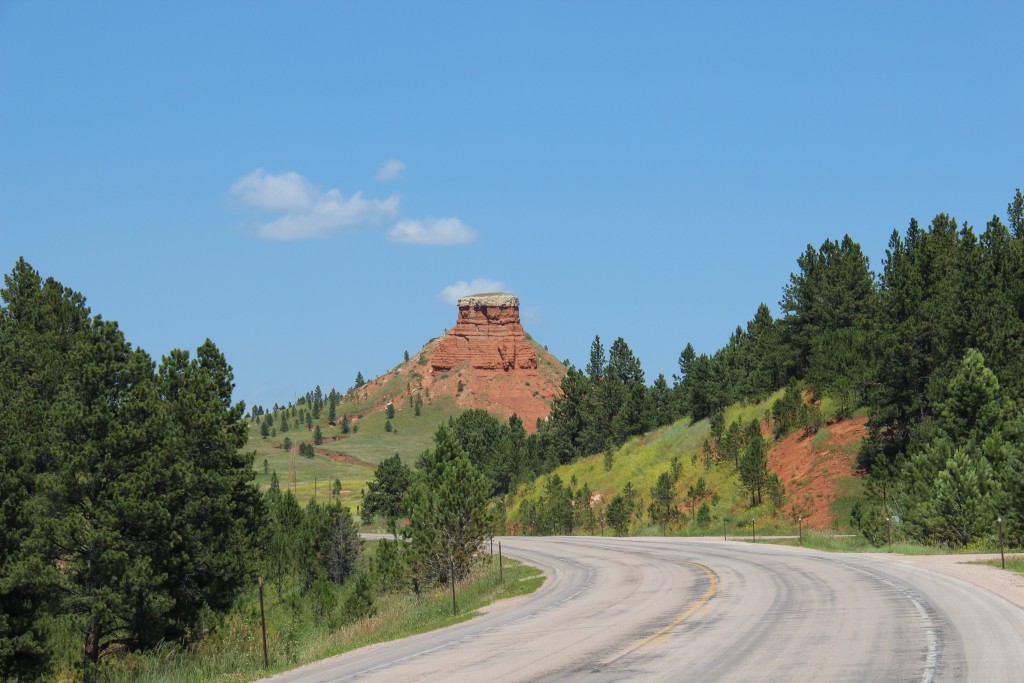 Our first stop was Devils Tower. It rises 1267 feet above the surrounding area and has many different stories of Indian folklore about how it formed. Most of them involve kids being chased by a bear, climbing on the rock, and the bear trying to claw its way up the side. I’m not sure how it really was created, but it certainly is intriguing. 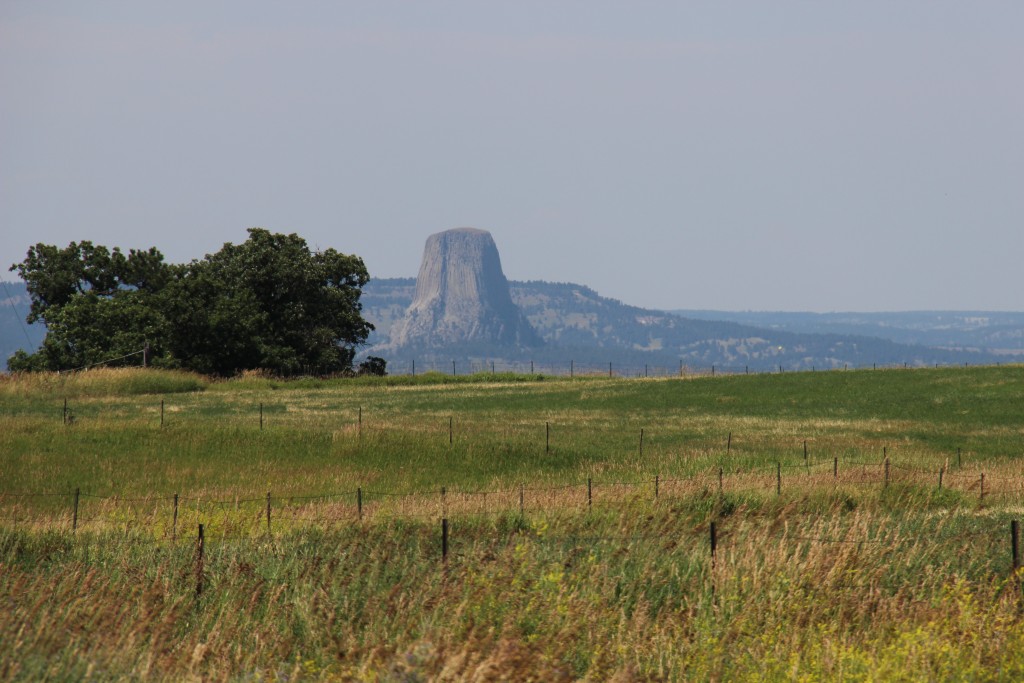 It is such an odd sight on the horizon! 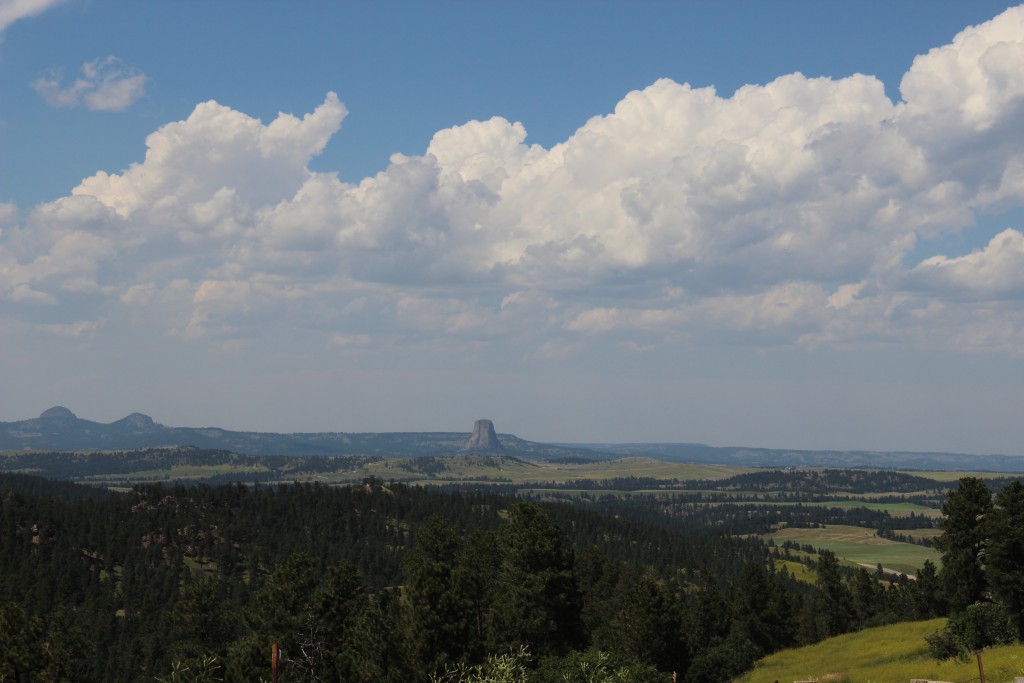 We only stopped briefly at Devils Tower because we still had a long ways to go, and it was about to storm! After a short walk to snap this photo, we jumped back in the car and tried to stay in front of the dark clouds. 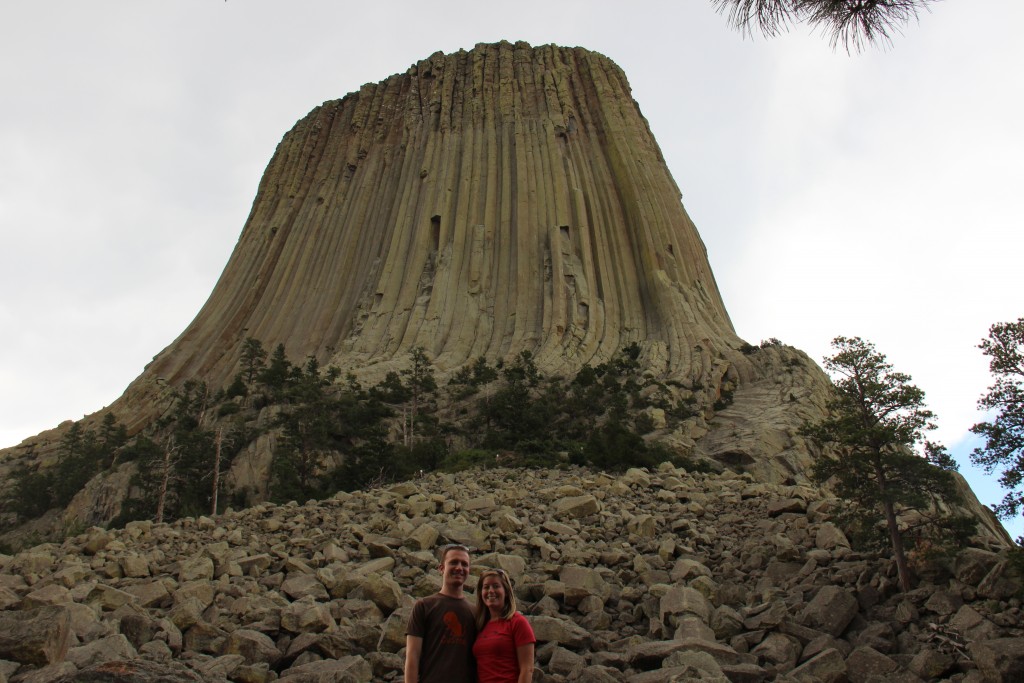 Aaaaand right about here is where I got pulled over for the first time EVER and got my first speeding ticket :/ Apparently they are very picky about their speed limits in Wyoming! 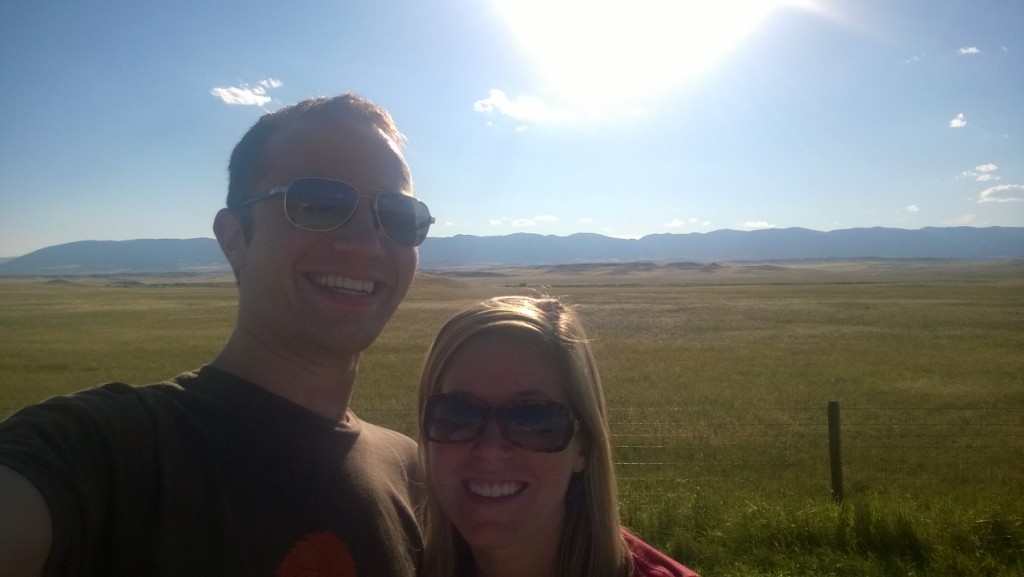 At some point during the day we’d looked at the atlas and saw Sacagawea’s grave site labeled. It involved a 1-2 hour detour from our original plan, but it also meant that we’d get to see Independence Rock and Devil’s Gate, two Oregon Trail landmarks! We knew taking this detour would end up making us arrive at our hotel in Dubois very late at night, but since it’s unlikely we’ll be driving through this part of Wyoming again anytime soon, we decided to go for it.

The most giant mosquitoes in the world live at Independence Rock, and man were they mean. I think we were outside our car for a total of about 90 seconds in order to snap a couple photos and then sprinted back to safety inside our car. Seriously, they were HUGE! 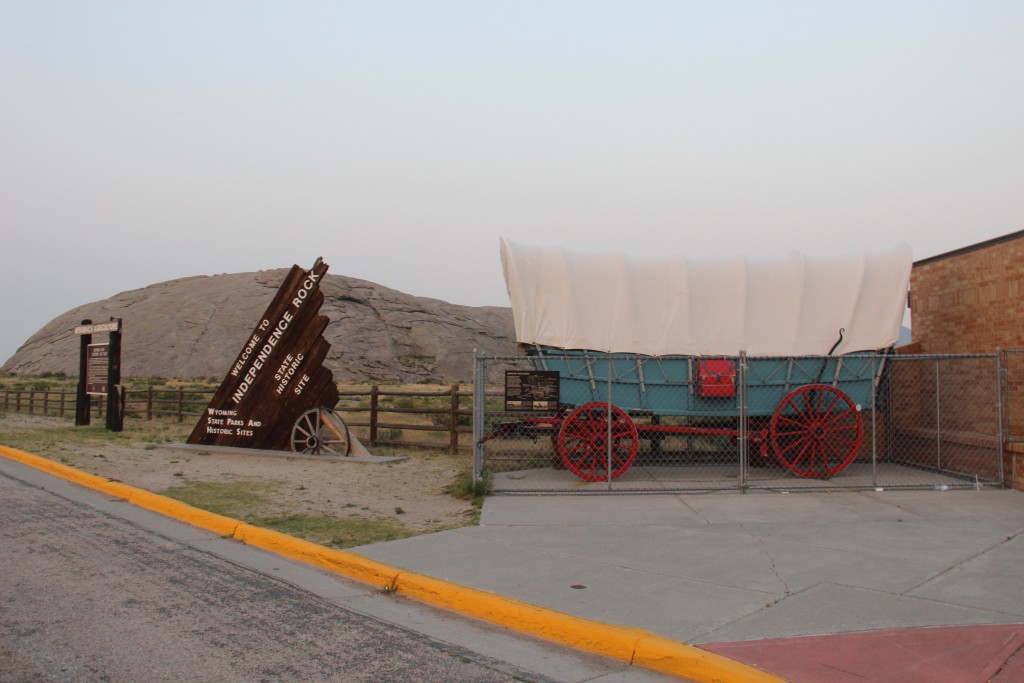 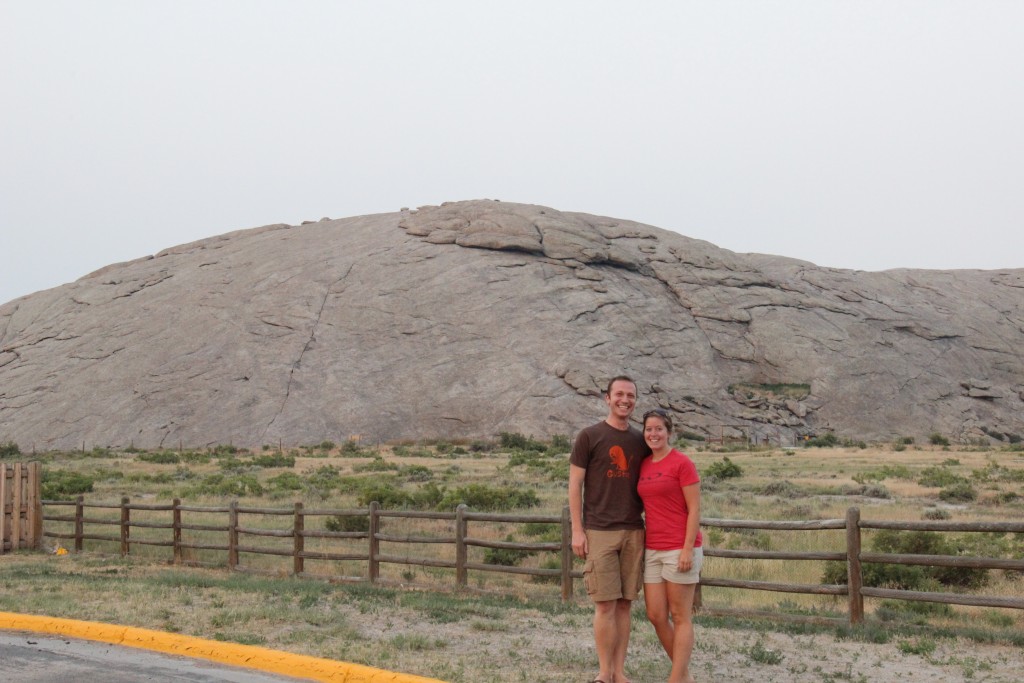 A little further down the highway was Devil’s Gate. We didn’t even get out here, just snapped a pic through the window to avoid the mosquitoes. 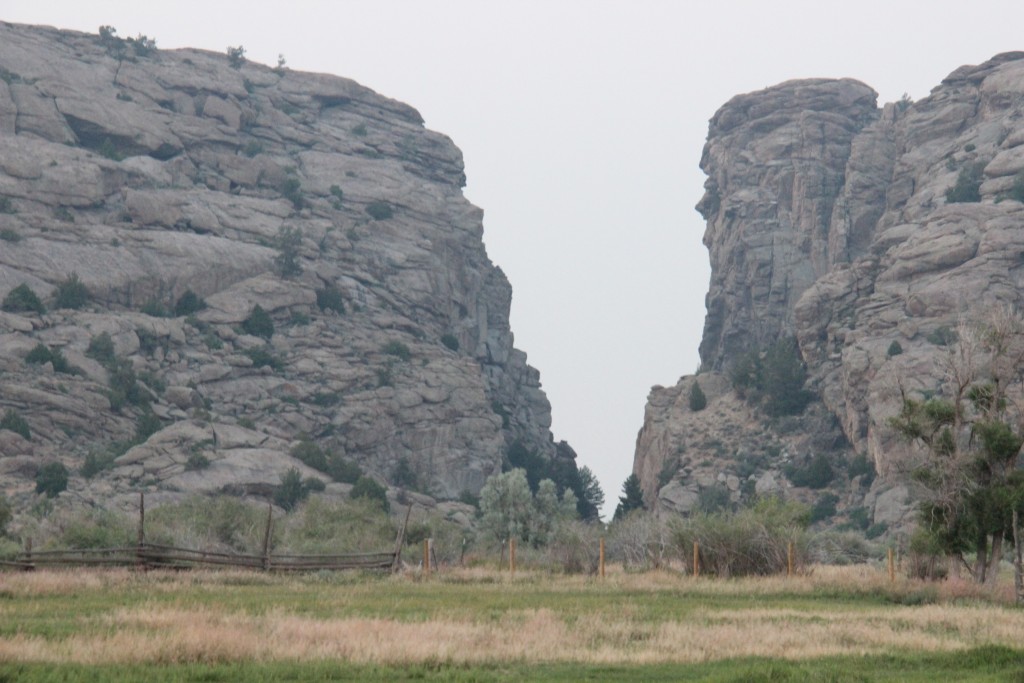 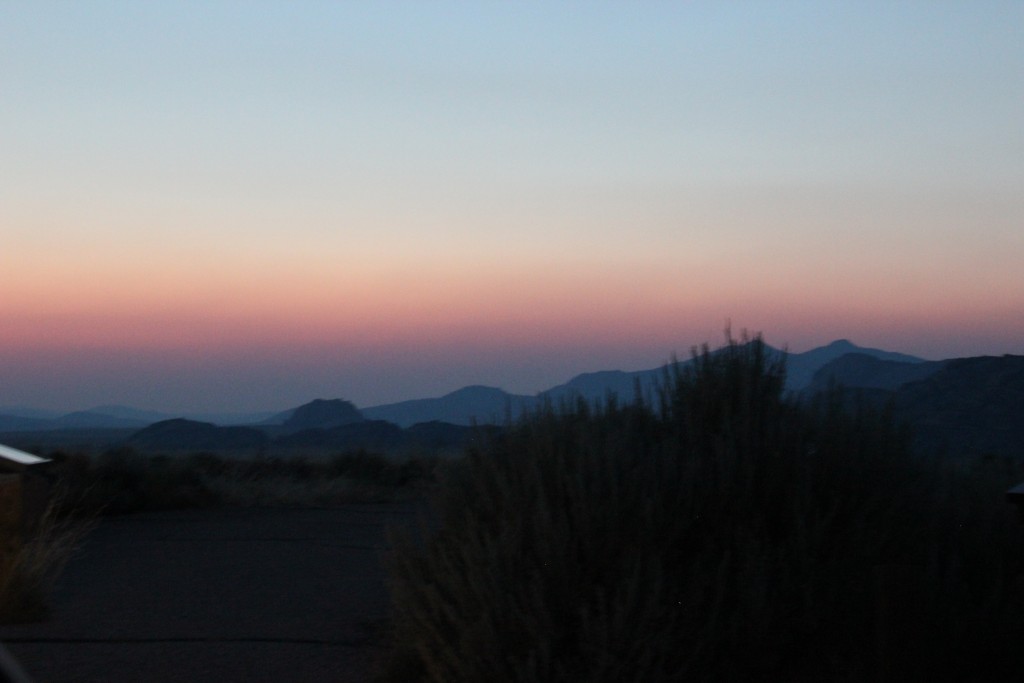 Finally around 10:30pm we arrived at Sacagawea’s grave site. There’s supposedly a statue of her somewhere here, but there was no way we were getting out of the car! It’s hard to tell from the pictures, but all the graves were decorated and had flashing LED lights on them. Super creepy, especially so late at night in the middle of nowhere! So again, we snapped a couple pictures and continued on our way. 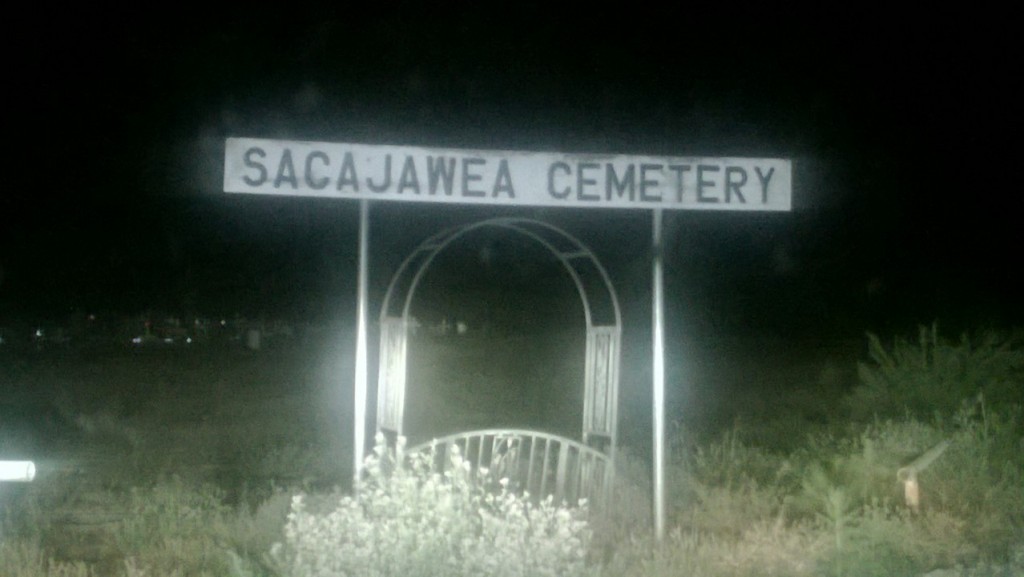 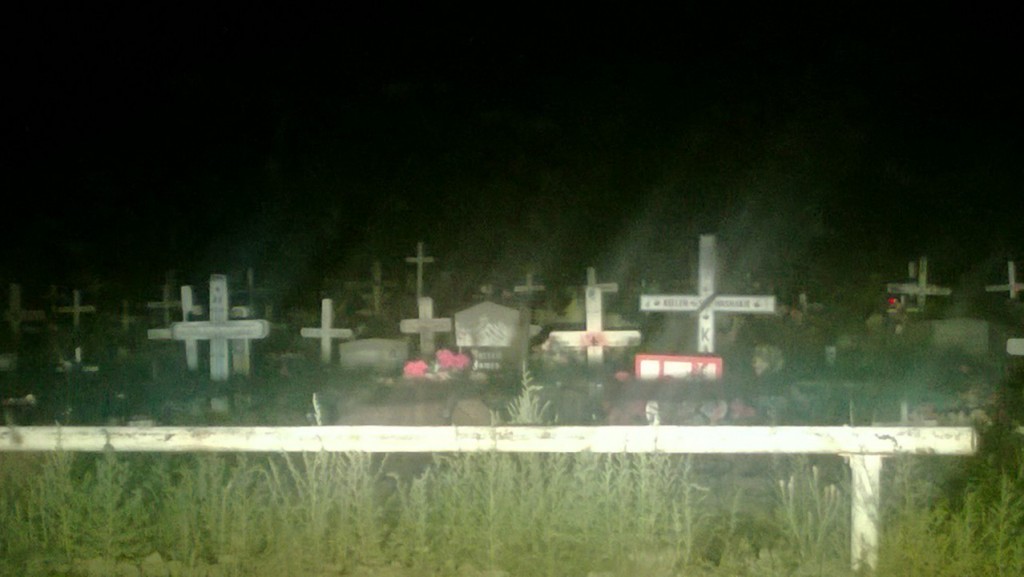 We still had about another hour and a half to drive to get to our hotel, so we arrived around midnight and fell right asleep. 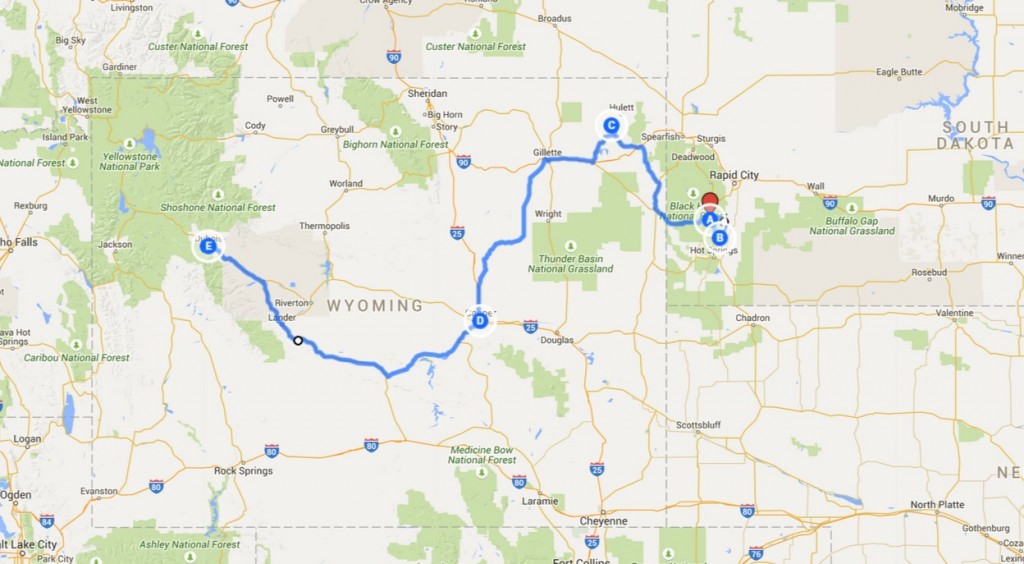 And a closeup of our Wildlife Loop Road route down to Wind Cave and up to Devil’s Tower: 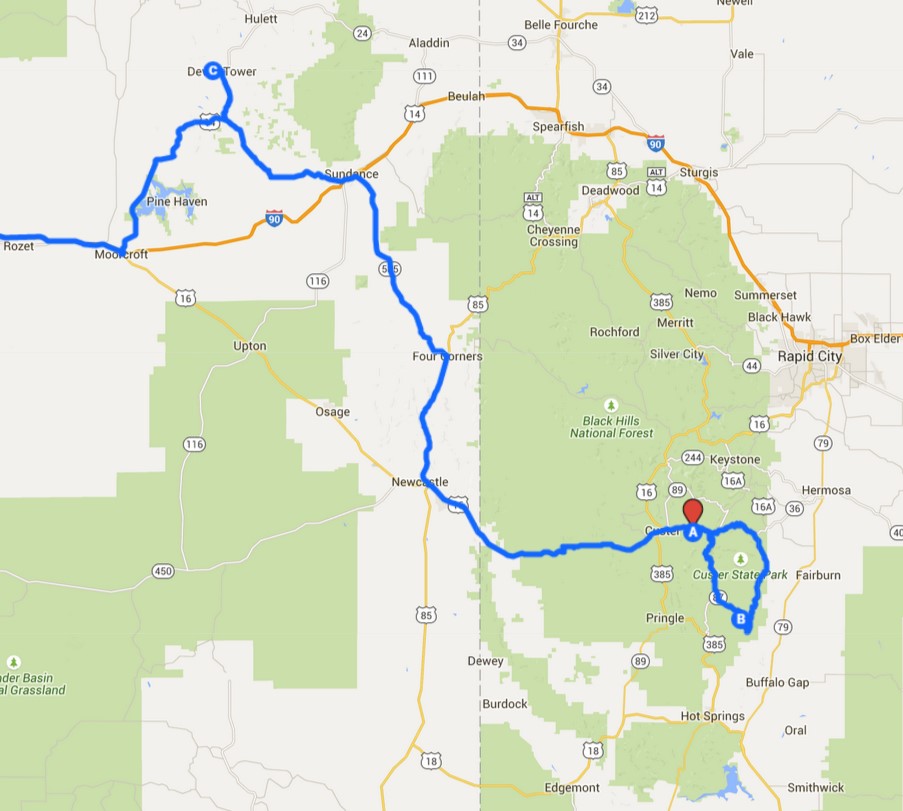 It was a very long three days of driving from Indiana to Wyoming with lots of stops along the way, but our plan for the next four days was to head to the Tetons, set up camp, and finally get some hiking in. Check back later for Day 4 updates!