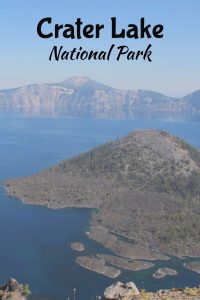 If you’re planning a trip to Oregon, Crater Lake National Park is a spot you can’t miss! It is a little bit in the middle of nowhere, so it can take some extra time and effort to include in your itinerary, but it is absolutely worth it! To recap our Oregon road trip for those of you just joining the series, we started off in Portland, then spent a day along the Columbia River Gorge, hiking at Multnomah Falls. Next we spent a day wine tasting in the Hood River Valley, followed by a day exploring Timberline Lodge at Mount Hood.

We spent a night camping at Trillium Lake near Mount Hood, and then finally we were off to Crater Lake, which was the part of our trip that I was most excited for. I’d seen so many pictures of the deep blue water and I could.not.wait. to see it in person! But first we had a four hour drive through the middle of Oregon to get there.

We were completely amazed at how many different landscapes we drove through in Oregon. The area around the Columbia River Gorge feels like a rainforest. The Hood River Valley is filled with vineyards and wineries. Mount Hood has the typical evergreen forests of the Pacific Northwest. And then barely a half hour south of Mount Hood we were driving through fields!

Here’s a closer look a Mount Jefferson, which we’d also been able to see from Timberline Lodge. 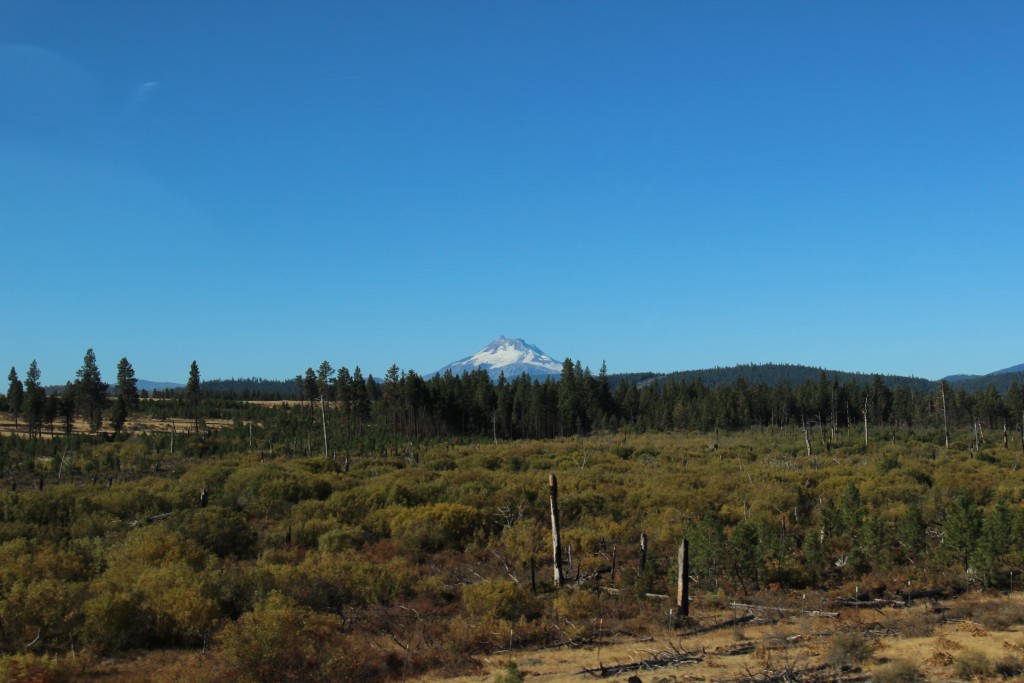 Not long after we were driving through desert canyons. We felt like we were in Arizona! 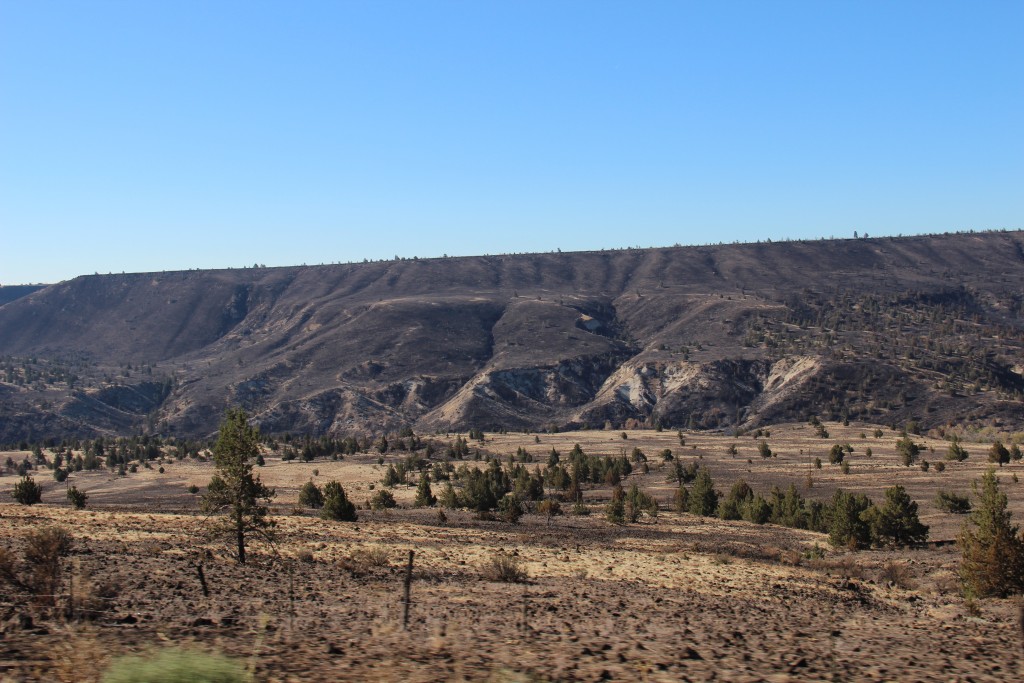 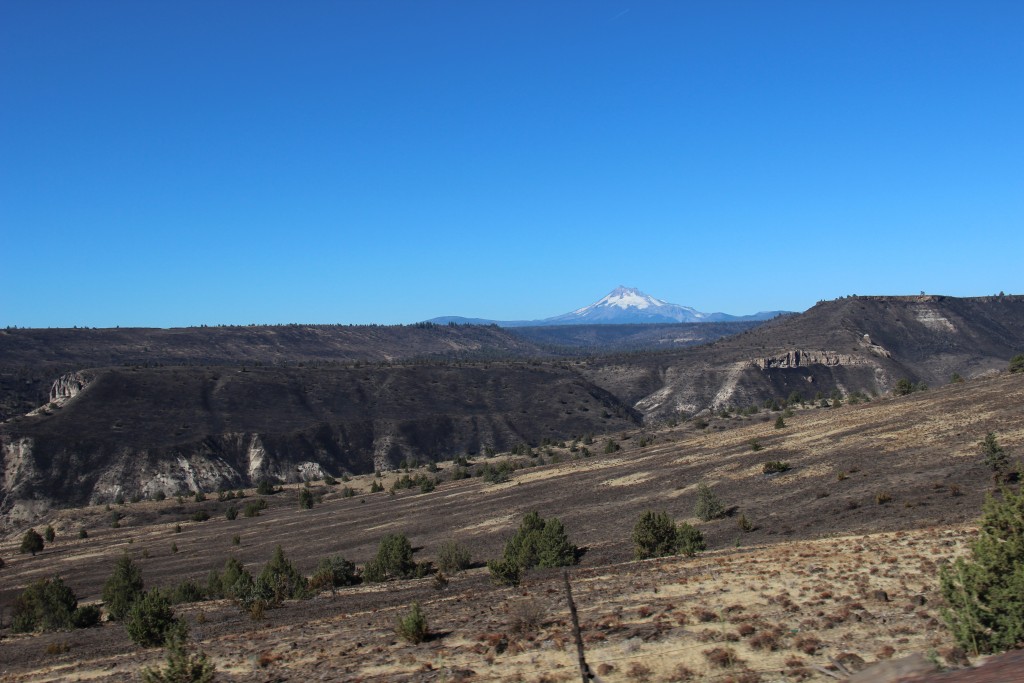 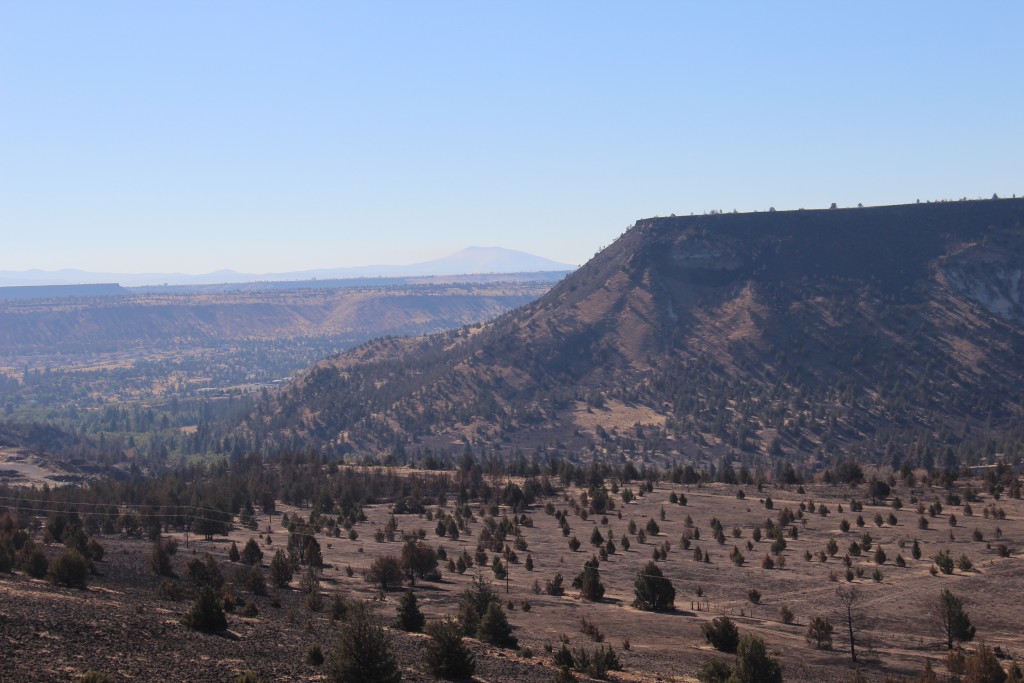 We loved seeing so many more volcanoes from the Cascade Range. I pulled up a map so that we could identify them all. I can’t remember which is which anymore, but along with Mount Jefferson, we saw Mount Washington, the Three Sisters, Black Butte, Three Fingered Jack, and Mount Bachelor. 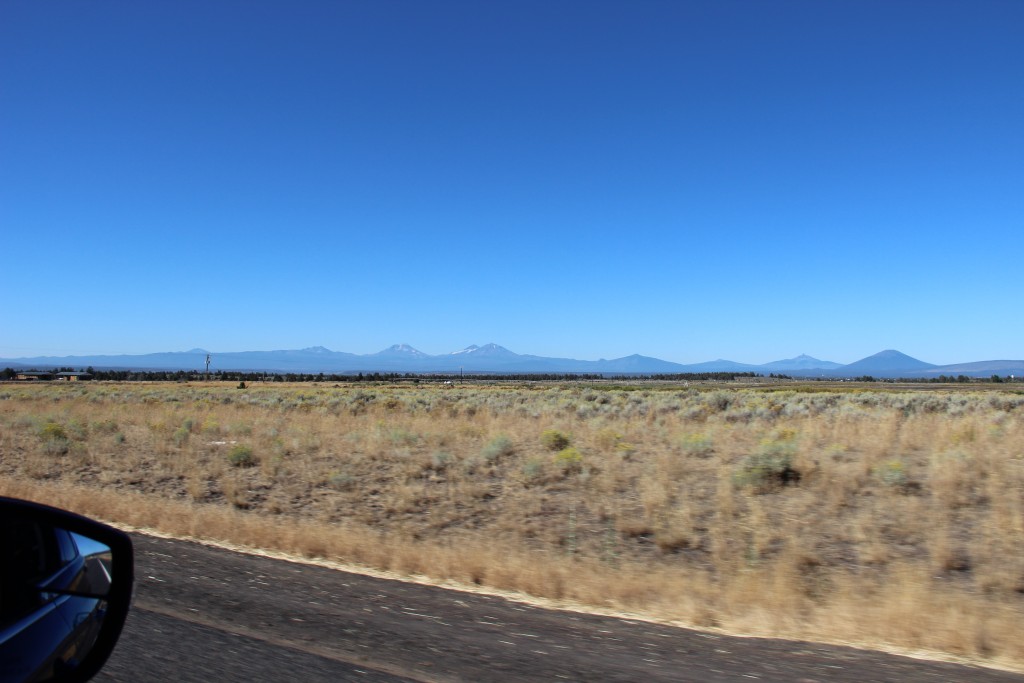 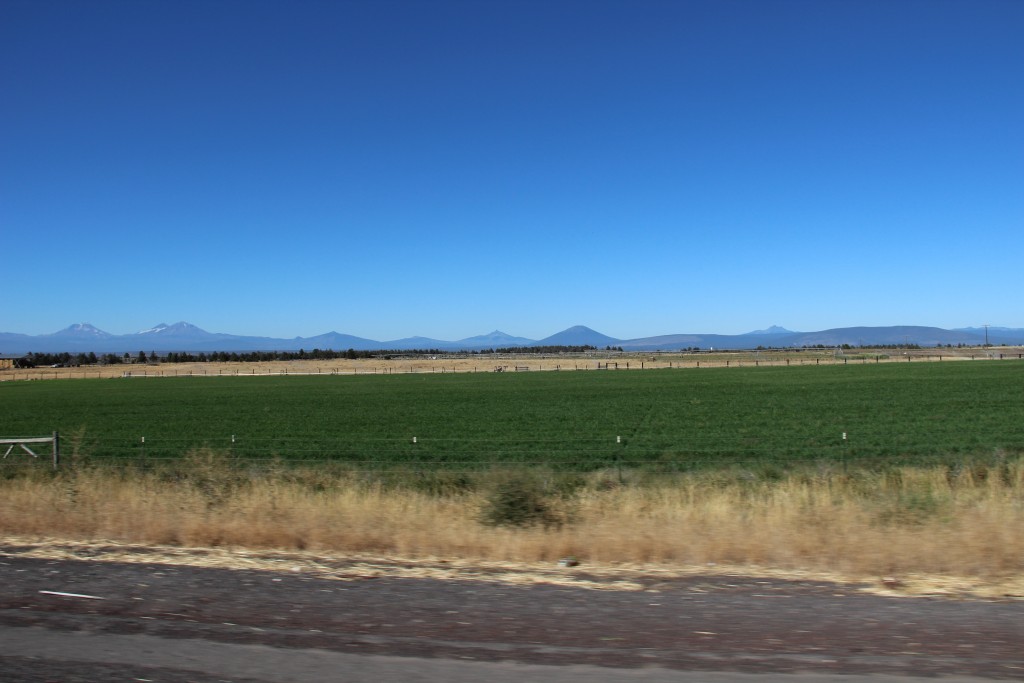 We stopped in Bend for lunch, and it was the perfect halfway point between Mount Hood and Crater Lake – exactly two hours from both places. Bend is an adorable town that I would love to go back to and spend more time in. 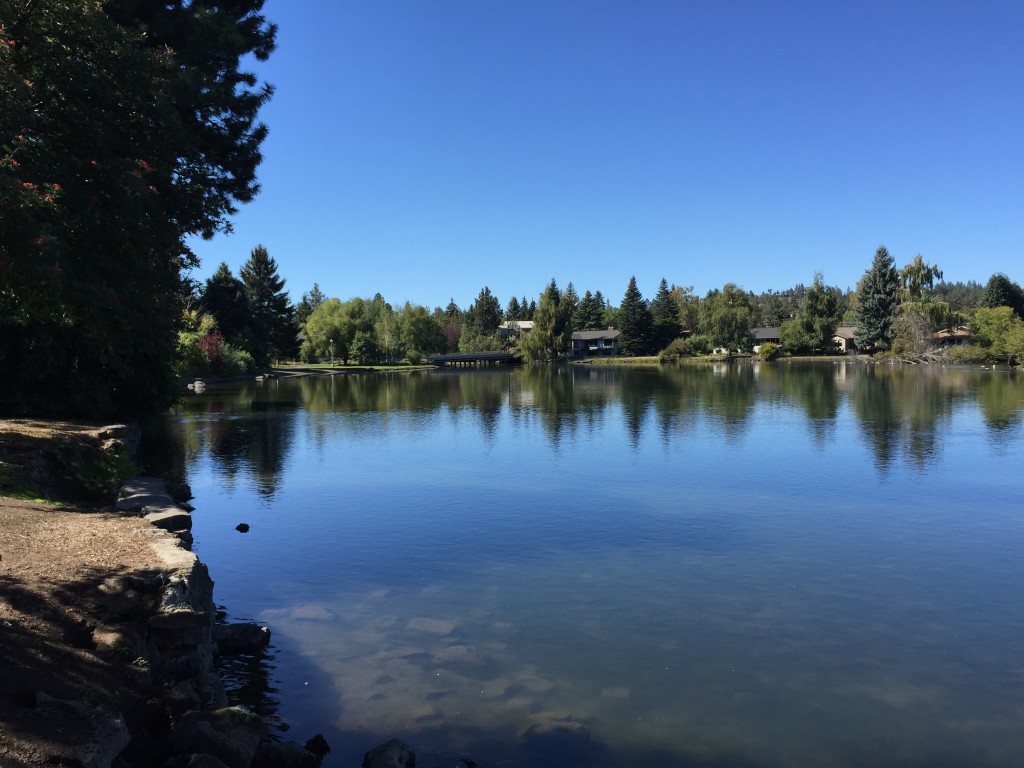 Bend is especially well-known for their breweries! It’s most famous for Deschutes Brewery, but since we’d already stopped at the Portland location at the beginning of our trip, we wanted to try something new. I hopped on Tripadvisor and searched for breweries in Bend and found Ten Barrel Brewing – most of the reviews talked about their great beer and amazing patio out back, and I was sold. Tripadvisor is one of my favorite tools when planning trips and also when we’re on the road. When we’re in a new city, I’ll often pull it up to see what restaurants people recommend, and we’ve never been disappointed!

We tried out their flight of ten beers and each found several that we really liked. 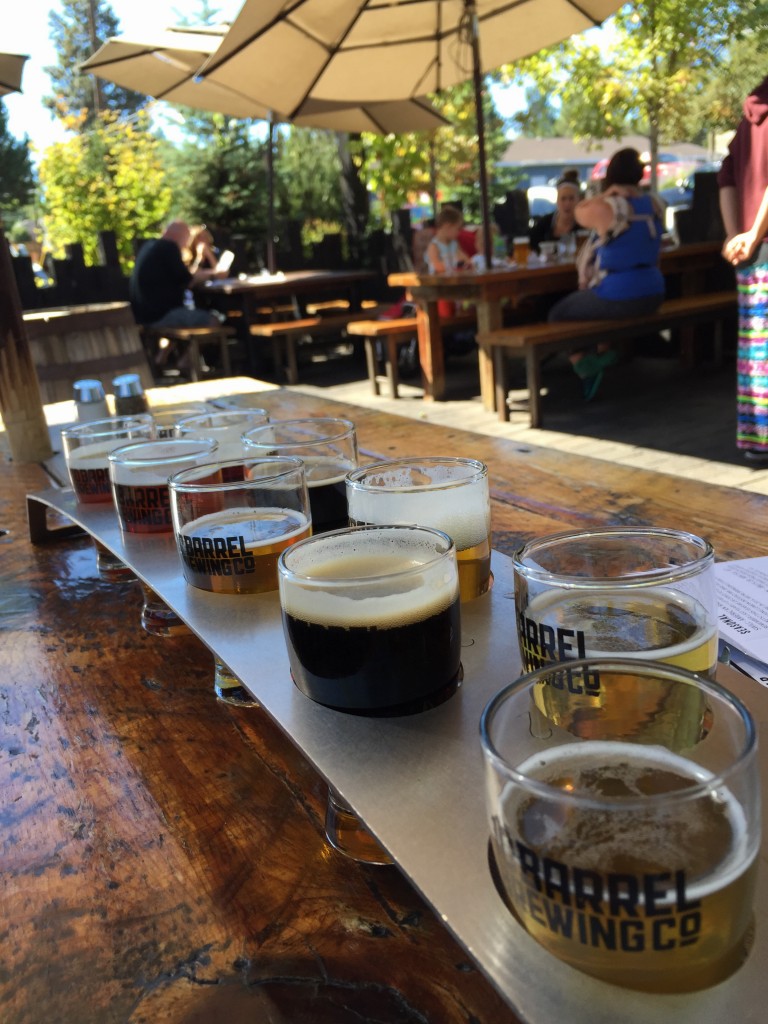 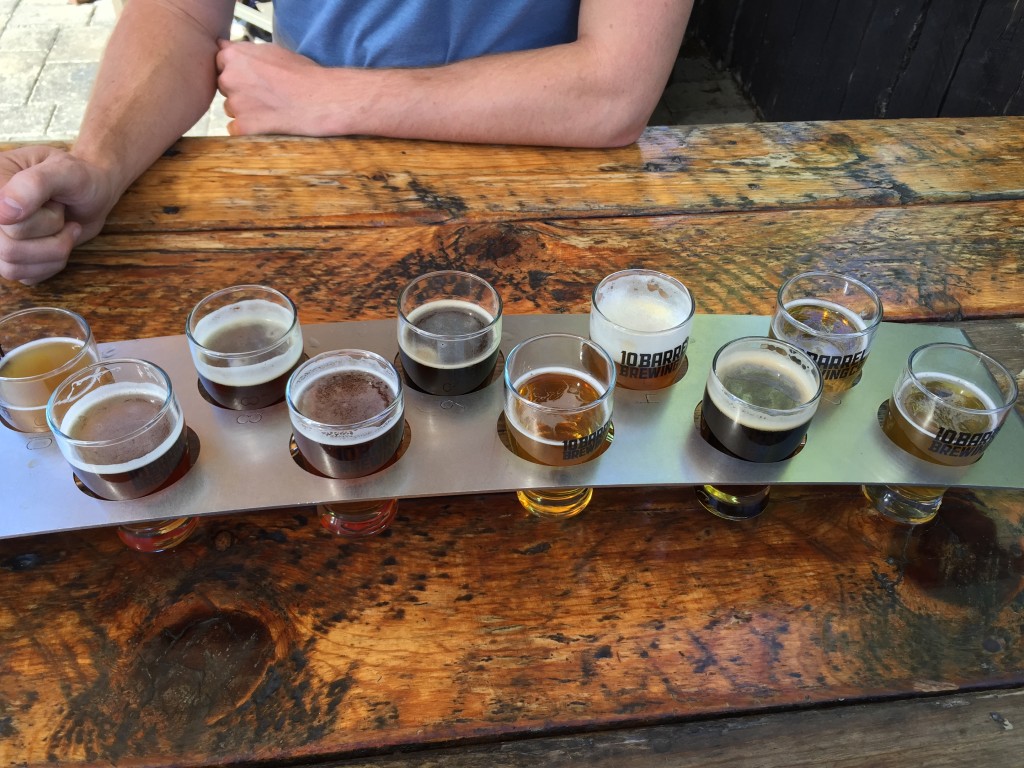 One last stroll along the river before hopping back in the car. 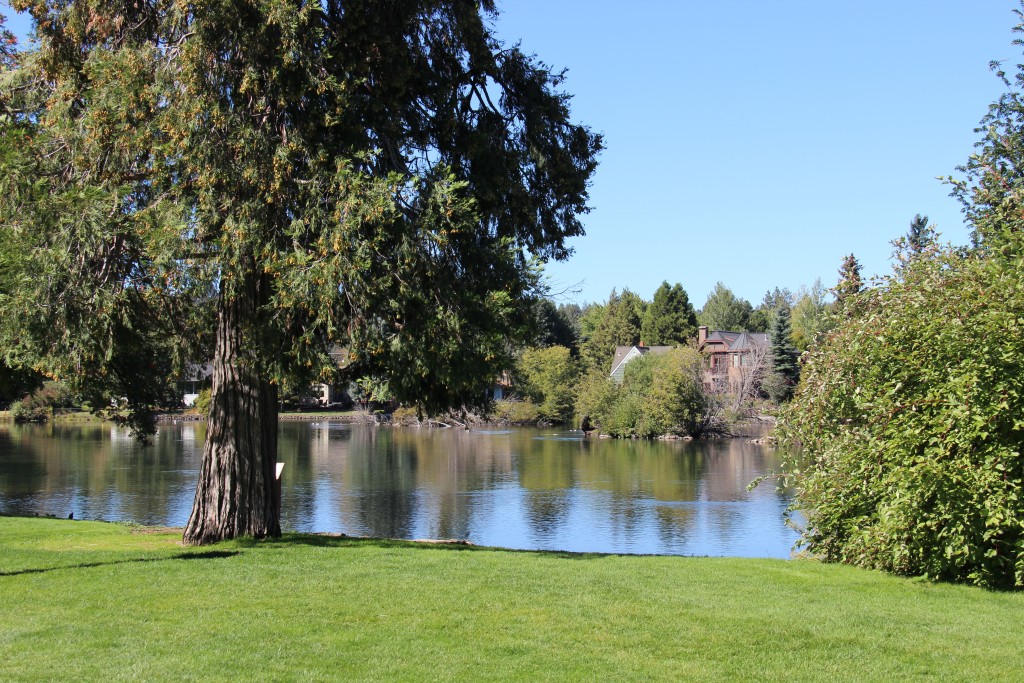 Crater lake had been having problems with forest fires for several weeks before we arrived. I’d been checking their Facebook page every day to see the status of the park roads. Luckily they’d been able to contain the fire on the north side of the park and reopen the north entrance a few days before we arrived. It was crazy to see (and smell!) the damage that the fire left behind. 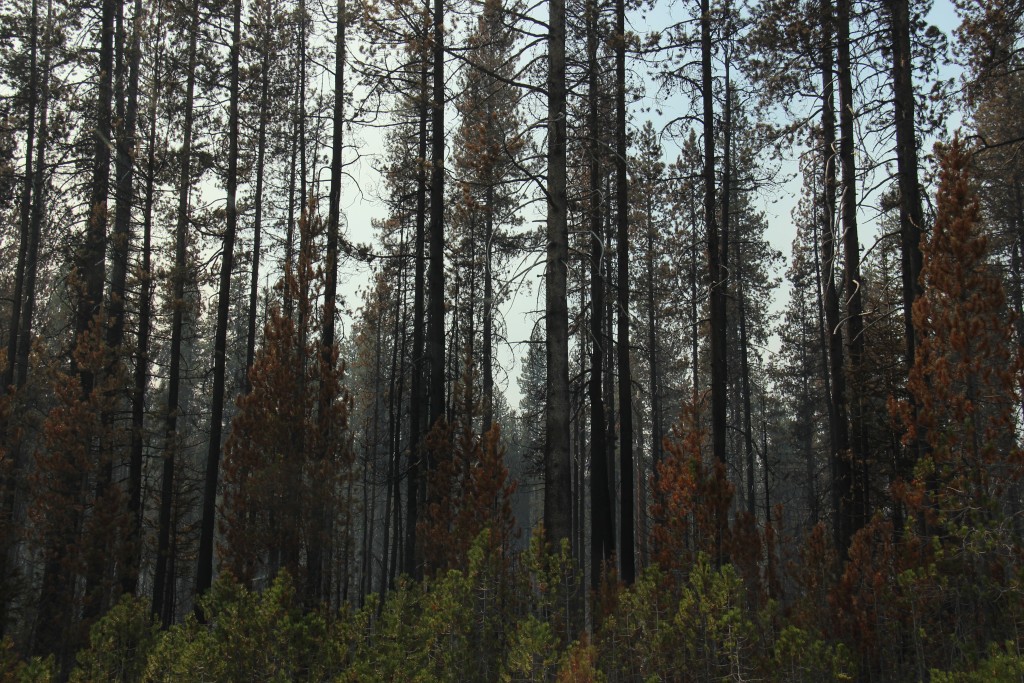 Driving along the Rim Drive we could see many fires in the distance. Luckily they were far enough away that they weren’t a threat to us in the park. We’d read about all the forest fires that had been raging in Washington and Oregon all summer, but this was the first time we’d seen any up “close”. 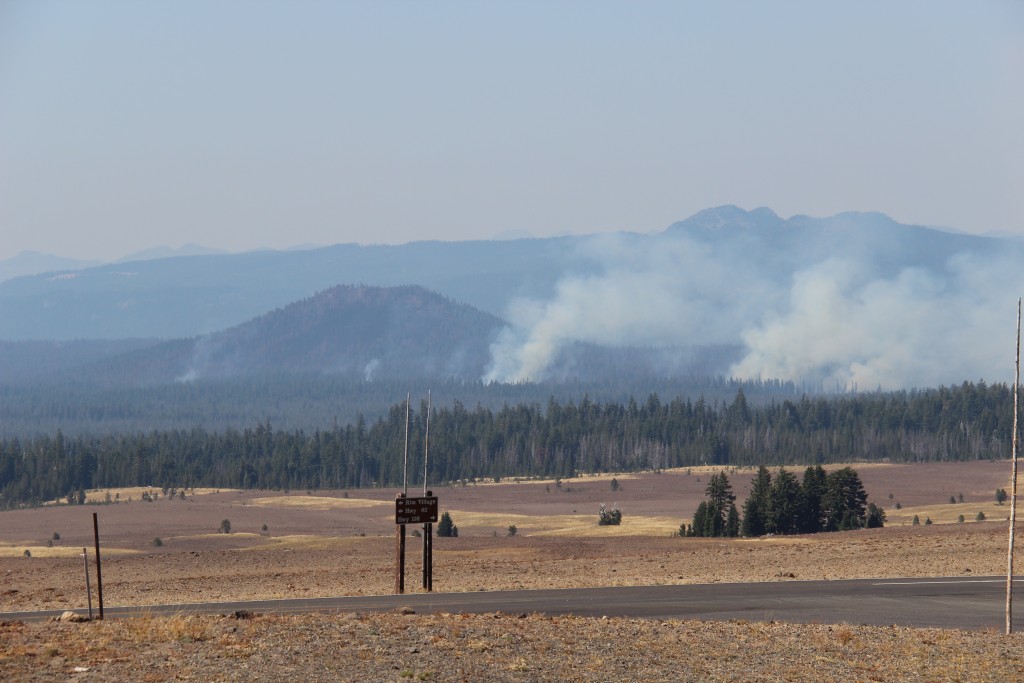 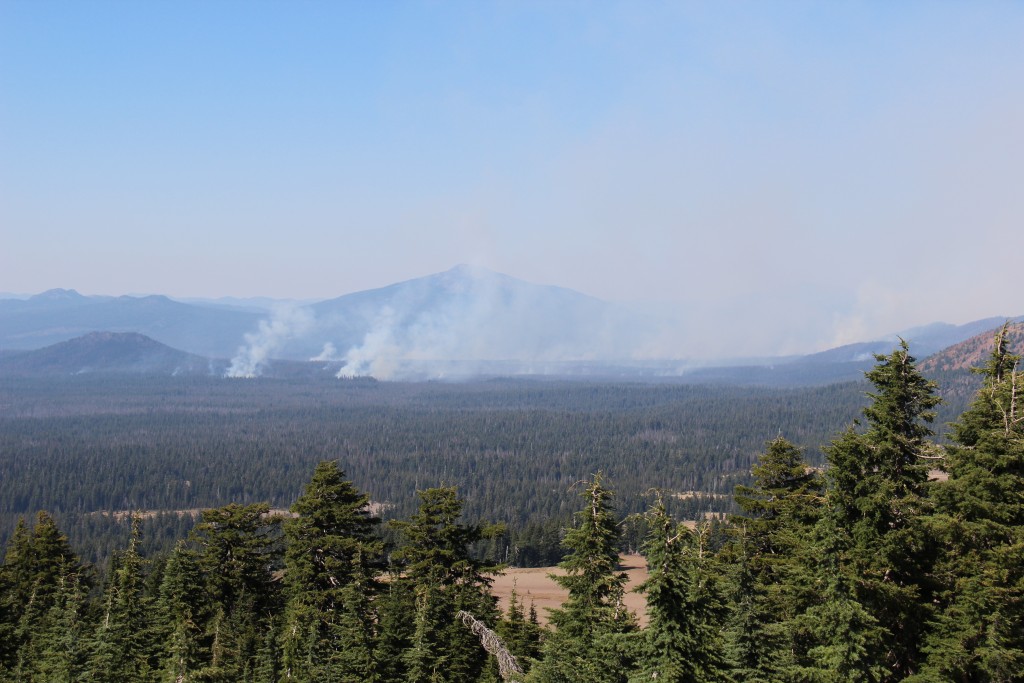 Here was our first look at Crater Lake! 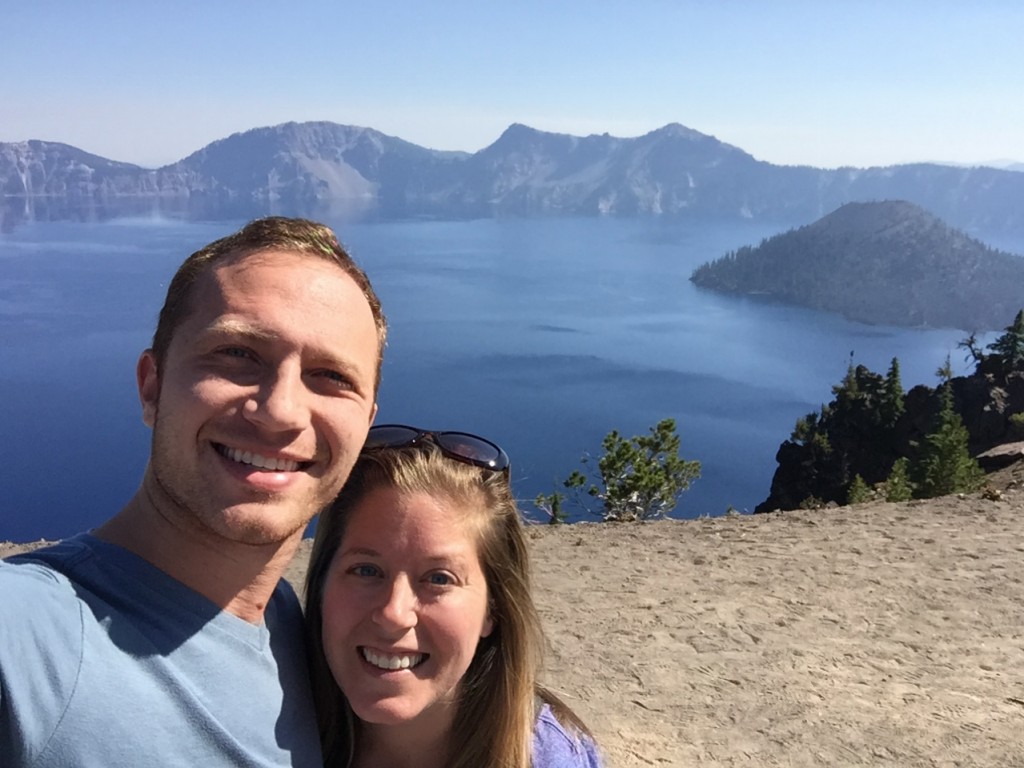 The Rim Drive is 33 miles all the way around and takes about an hour and a half to drive the entire thing. (Or more if you stop for lots of pictures!) We entered the park from the north and were staying on the south side of the lake, so we got to drive halfway around this first afternoon. We stopped at many of the lookout spots to see where we could get the best view! I think this lookout (Watchman Overlook) was the best. 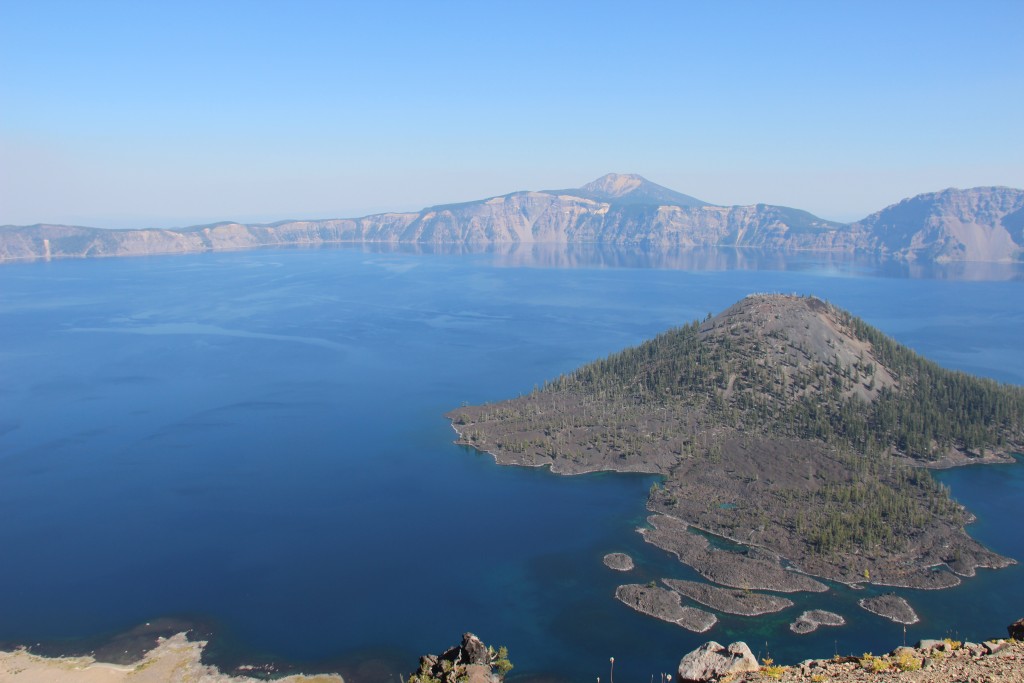 There aren’t many lodging options inside Crater Lake National Park – Mazama Campground and Cabins or Crater Lake Lodge are really the only choices. The nearest towns are about 20 miles away. We opted for two more nights of camping since we didn’t want to have to drive in and out of the park each day, and we were trying to save some money since it was such a long trip. Mazama Campground is about 7 miles away from Crater Lake, and it’s down a lot of windy roads, so it still takes about a half hour to get from the Rim Drive down to the campsites, but it’s definitely more convenient than staying in one of the “nearby” towns.

After getting our campsite set up, we drove back up to explore Crater Lake Lodge. Like Timberline Lodge at Mount Hood, Crater Lake Lodge is full of history. Construction began in 1909, and from the beginning it was a tough undertaking. Because of its remote location and harsh winters, construction could only really happen during the three months of the summer season. The lodge finally opened in 1915, but the accommodations were far from adequate. Several rounds of improvements and upgrading occurred over the next few decades, but by the 1960’s it was clear that the brutal weather and poor original design were causing the building to deteriorate.

The National Park Service took over the lodge in 1967, but the repairs were deemed too expensive, so the lodge continued to deteriorate. Finally in 1989, engineers declared one of the wings of the lodge to be unsafe for occupants – and if it collapsed, it would take the entire building down with it. So in 1991, reconstruction finally began. Many original materials were saved, but an entirely new structural system was built – this time up to code. The lodge reopened in 1995, after nearly $15 million in renovations. 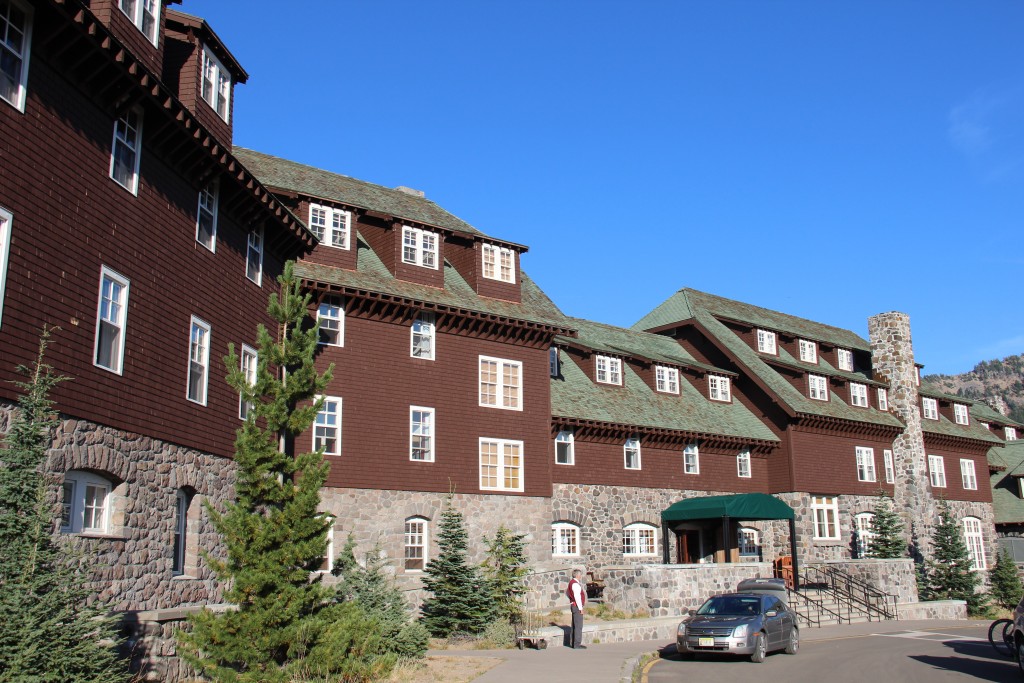 We’d planned on having dinner at the lodge, but if you don’t make reservations ahead of time, it can end up meaning a long wait. We didn’t mind though – it gave us some time to sit out on the patio in front of the lodge and enjoy the sunset over Crater Lake with a glass of wine. 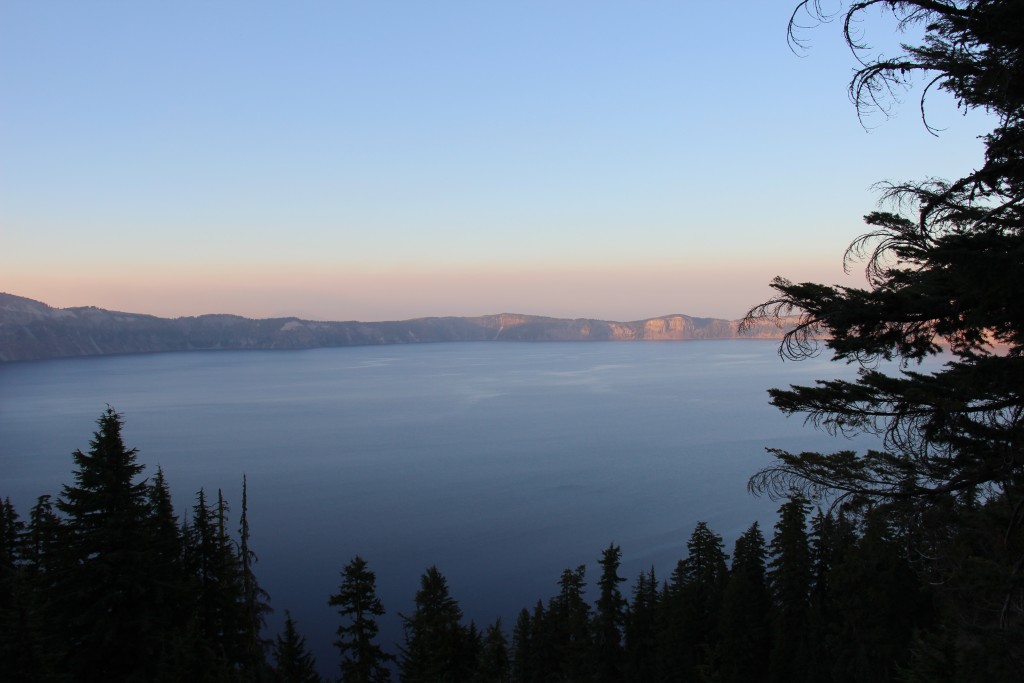 It was a pretty spectacular end to the day! 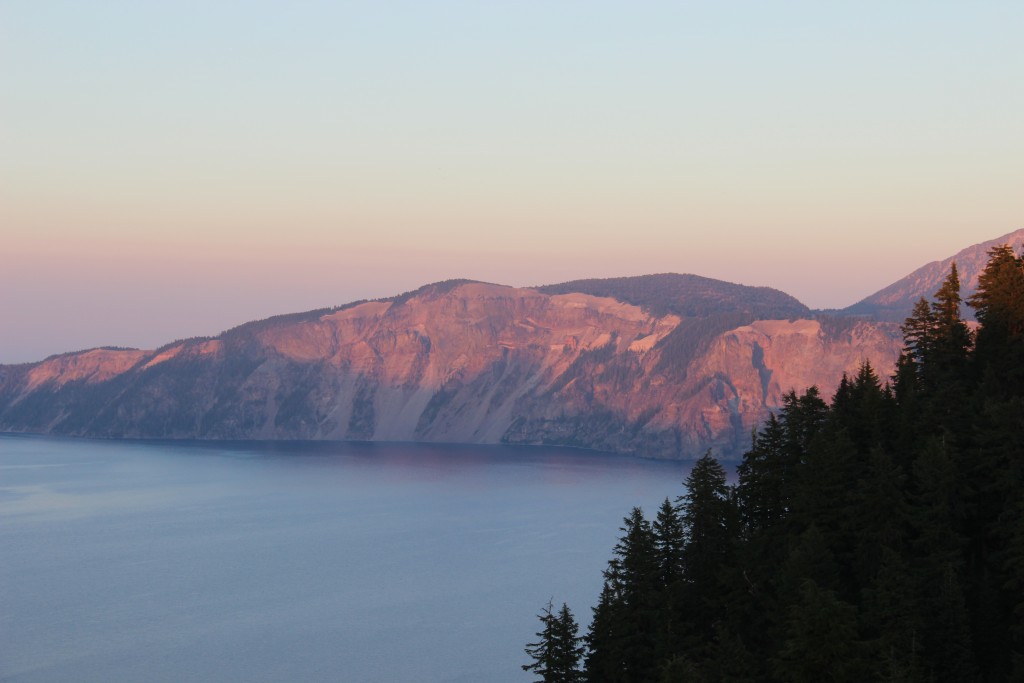 The patio was wonderful, and we moved inside next to this cute fireplace when it got cooler after the sun went down. 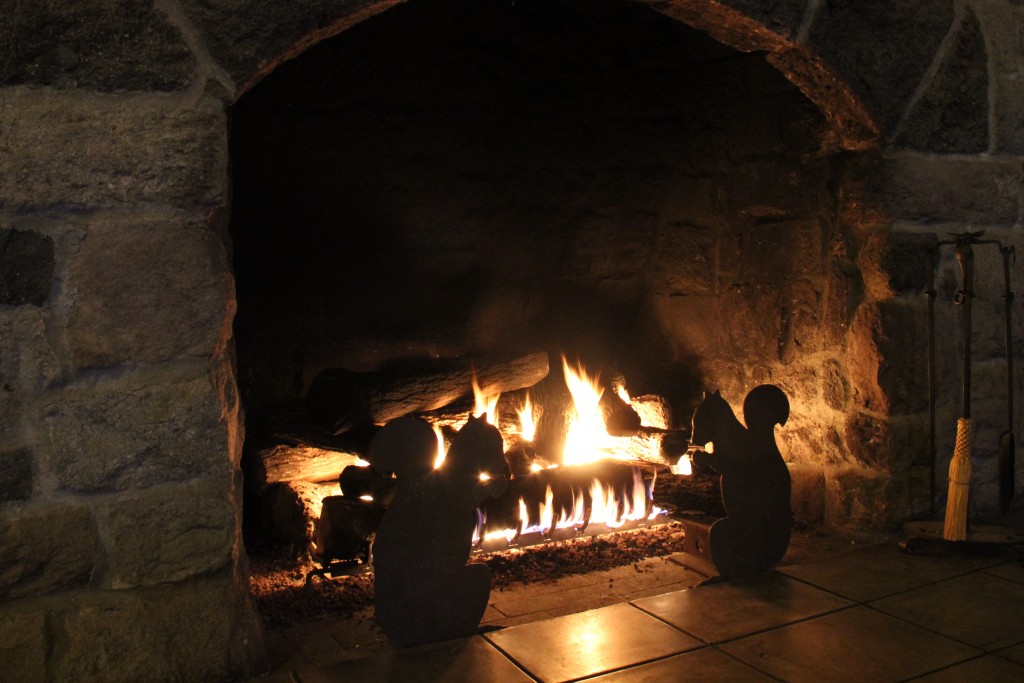 It’s the 100th Anniversary for Crater Lake Lodge, so they had special plates! The dinner was decent, but nothing too amazing. We both enjoyed Timberline Lodge’s food a lot more, so if you’re traveling to both lodges and don’t want to splurge for dinners at both, I’d definitely recommend Timberline over Crater Lake. 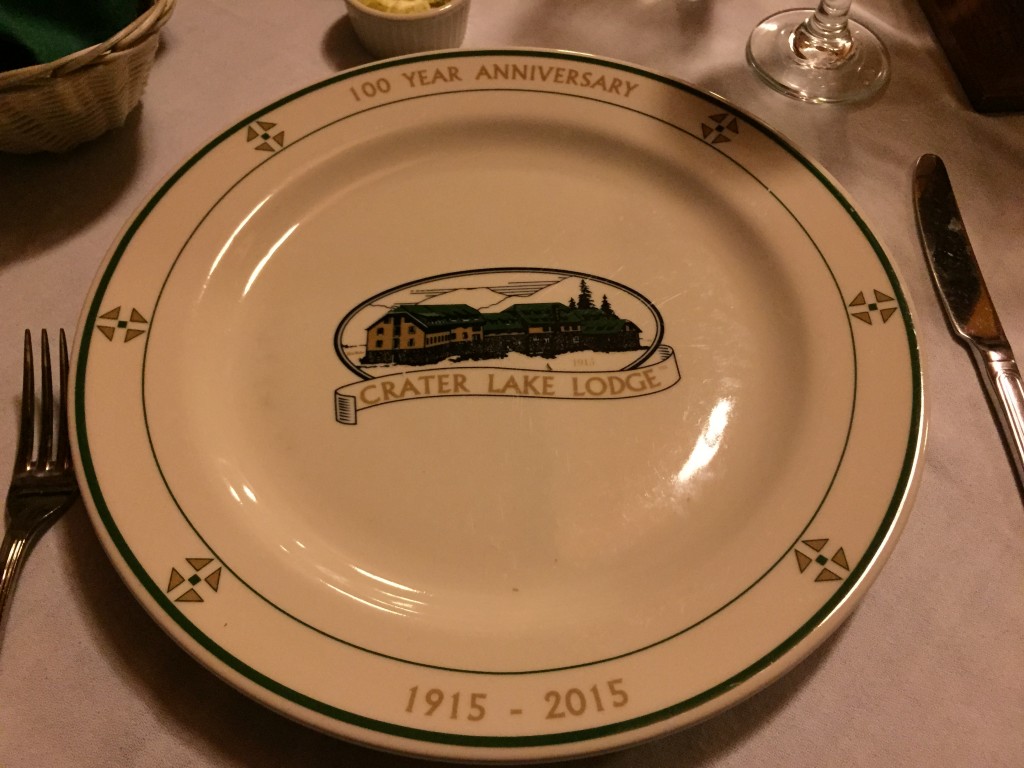 After dinner we stepped outside to the most amazing night sky. It’s incredible how many stars you can see when you get away from the city and out into the middle of nowhere! Here’s a few shots I captured on my camera, but they don’t do it any justice at all. 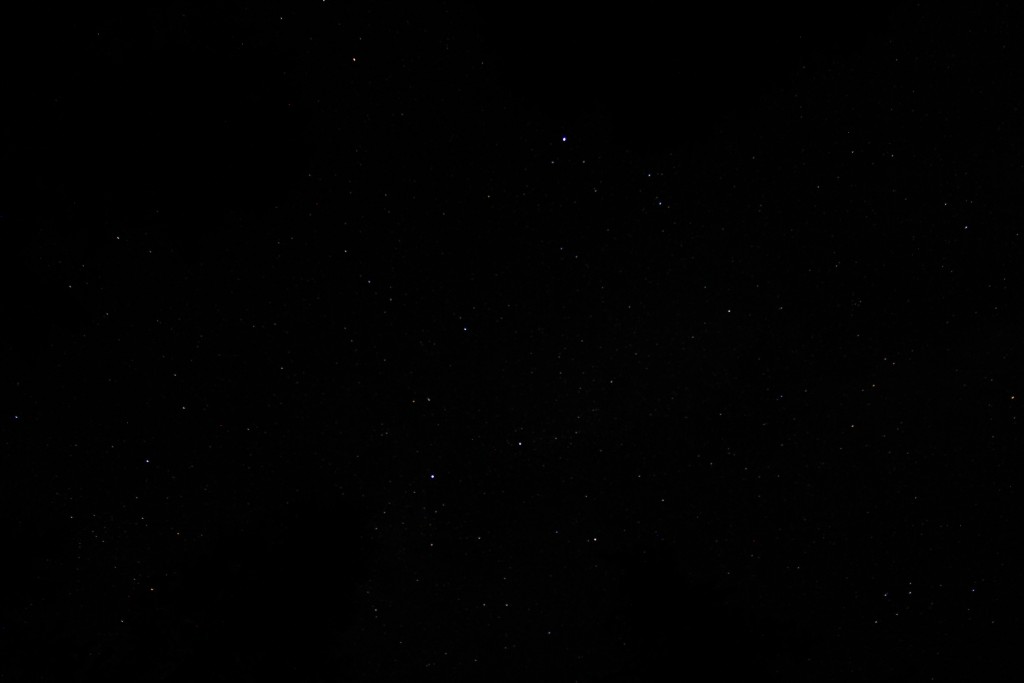 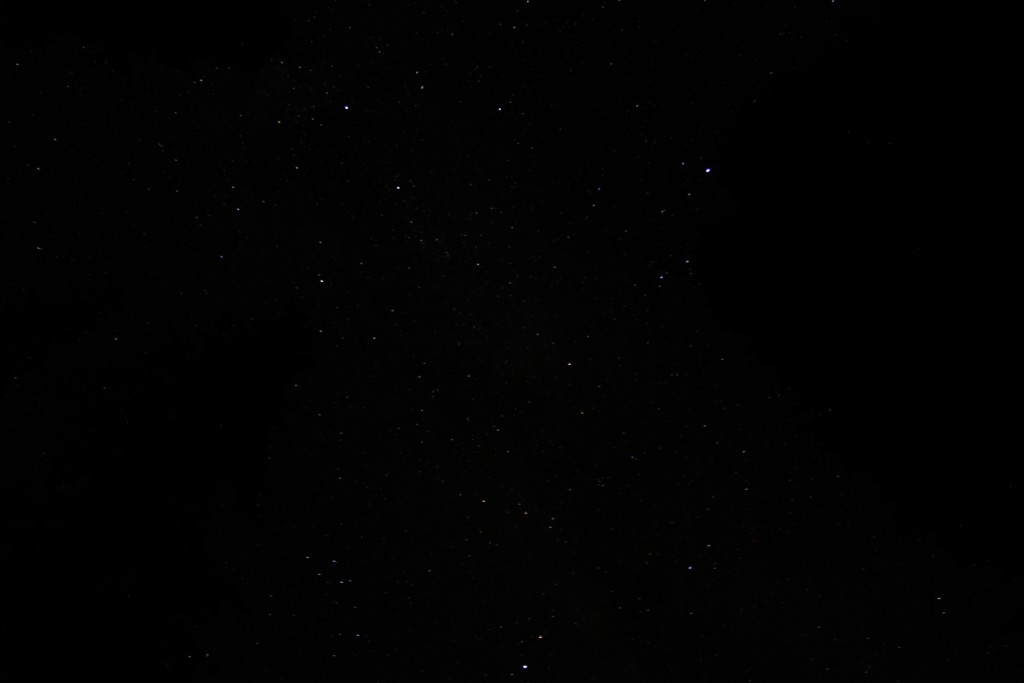 Stay tuned for our next adventure at Crater Lake – a trip out to Wizard Island!

Planing your own road trip through Oregon? Check out these other posts too!

An Afternoon in Portland