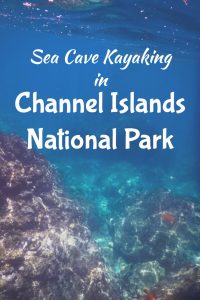 On Sunday morning we woke up early to begin our second day of kayaking. I’d booked our trip with Santa Barbara Adventure Company, and they offer a lot of different options. I’m so glad I picked the two-day trip! Our first day of kayaking was great, but the second day was even better. This time it was just the two of us with our guide, and the goal was to get to Potato Harbor in time for lunch.

We started at Scorpion Anchorage again and kayaked along the coast, stopping at a few of the caves we’d seen the day before. It was another great day for kayaking, with very calm waters.

We saw a ton of these tiny Pelagic Crabs swimming in the water next to us.

I could not get over how blue the water was!

We loved these caves where you could paddle through the rock instead of going all the way around!

It took us about two hours to get to Potato Harbor, and there were lots of sea lions there to greet us.

We must’ve been ahead of schedule because our guide asked if we wanted to keep going a little further, to Coche Point. I’m so glad we did because we ended up seeing the coolest cave, called Back Door. From the outside, it looked like another cave that you could paddle all the way through, because you could see some sunshine.

But it ended up being this private little cove that opened up to let the sun in. It was so calm and peaceful and totally unexpected.

View looking back out from the cove

We turned around once we’d reached Coche Point and headed back to Potato Harbor for lunch. We saw tons of sea lions lounging on the rocks. It was funny to watch them swim, too. They stick their flippers into the air in order to regulate their temperature.

We finally reached Potato Harbor and stopped on the beach for a lunch break.

It was cool to see the cove from the beach after seeing it from up on the cliffs the night before!

Here’s a look at a map of Santa Cruz Island, where you can see how far we kayaked along the coast. We estimated it was about 8 miles total from Scorpion Anchorate to Coche Point and back – not bad for how little we’d each kayaked before this trip! Our guide also told us afterward that he’d only made it out to Coche Point one other time, so we thought it was cool to have seen an area that not many others have been.

The tide was low enough on our way back to Scorpion Anchorage that we were able to stop in one last cave, called Shark’s Tooth. It’s called this because of all the rocks sticking out from the ceiling! We really enjoyed exploring all the different caves on this kayaking trip – each one was completely different and required some teamwork to navigate through in a double kayak.

If you’re ever in the area and are interested in kayaking in the Channel Islands, I’d highly recommend Santa Barbara Adventure Company. It was nice to have such a small group kayaking the first day and then to have a private tour the second day. The guides were very informative and helpful, and they made the weekend a lot of fun. We were able to rent all our camping gear from them, which was great since we’d flown in from Seattle. We loved having the chance to go snorkeling, too! It was a great weekend with so many different activities.

We had a couple hours to rest on the beach before catching the boat back to Ventura Harbor.

Island Fox – another species only found in the Channel Islands

We took the 4:30 ferry back to the mainland, and we had an awesome surprise of seeing two humpback whales, along with hundreds of dolphins! It was a wonderful end to our trip to Channel Islands National Park.

After landing back at Ventura Harbor, we drove along the Pacific Coast Highway to Santa Monica, where we were staying for the next two days. Check back tomorrow for a post on our visit to Hollywood!